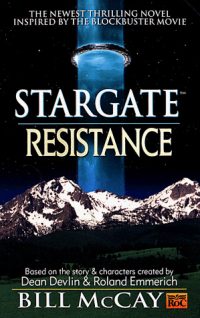 The Abydan colonists are stranded on the planet Ballas, where they are stalked by a merciless new enemy: cat-like predators with cunning skills and an unknown agenda.

Led by Colonel Jack O'Neil and Daniel Jackson, the Abydan refugees left Earth for a world of their own to call home. Instead they found hell ...

Earth's Stargate link to planet Ballas is broken, leaving the Abydan colonists stranded -- and stalked by a merciless enemy. Believed at first to be primitive beasts native to Ballas, these cat-like predators arrived through the Stargate -- possessing superior firepower and innate military cunning. But who are these aliens, and why are they on Ballas? The answers lie in the secrets past of an alien race -- a race that is all too familiar to O'Neil and Jackson ...

This book takes place almost immediately after Reconnaissance -- just long enough after that novel for Sarah O'Neil to be advised that contact has just been lost with Jack and the others on Ballas.

On Ballas, Colonel Jack O'Neil continues to lead his people--the combined forces of his original colony escort (Daniel Jackson, Ferretti, and others), the original Abydan colonists (including Kasuf, Sha'uri, Skaara, and many, many others), and Colonel Dale Gunther's Special Operations Capable Marine Expeditionary Unit (SOC-MEU), the so-called "Space Marines" (including Major Adam Kawalsky). They have been cut off from Earth by the StarGate use of the so-called "hoodats" (AKA the "cats"). They are blast-lance-wielding, armor-clad aliens that once served Ra's "forerunner" race.

(The story picks up right where Reconnaissance left off, so it is best to either have read the book or GateWorld's summary before reading further.)

We finally get our first glimpse inside the cat warrior culture when we meet Scout Leader Sekhmet, a female feline warrior of the Clan of the Crystal Claw, and Director Merraq, a new commander on the scene. Sekhmet had been the one to escape through the StarGate at the end of Reconnaissance. She had reported on the human activities on Ballas to the Clan Paramounts on the planet Merimde. She also has Clan ties to previous StarGate explorer Unas'ankh, who is now dead (killed during the earlier assault on O'Neil's troops), but whose explorations had brought glory to the Clan.

(Quick terminology lesson for those who didn't read the Notes: the cats are the "People," who are divided into the mad, semi-sentient "regressives," the cannon fodder but more sentient "Servitors," and the leading, rational "Successors." These were all created, as we'll see in a bit, by Ra's race, the "Predecessors." They were referred to not as the "People," but as, appropriately, the "Servants.")

In the midst of a renewed attack, while the Abydans and Earth men retreat from their settlement area, a new Hunt (wave of warriors) of Successors, led by Centurion Niay, comes through the StarGate. Luckily, though, shortly thereafter, as the Successors are starting to bring udajeets through the Gate in pieces, Lt. Phil Halloran, one of O'Neil's original team on Ballas, manages to detonate a series of C4 blasts that they'd set up in the StarGate chamber. This buryies the room and blocks off access to the StarGate (and any more forces for Merraq).

In the retreat, Daniel and Sha'uri lead a group in one direction, leaving them on their own, while O'Neil sets up a new command post. Needing someone to help translate the writing inside the Predecessors' research installation that the Successors are trying to secure, Skaara suggests, of all people, Imiseba, the young would-be leader that had wanted to blow up the StarGate and usurp Kasuf. They soon discover the genetic and physical manipulation of the feral beasts that became the Servants, which are now further mutated into the cannon fodder Servitors and the Successors (like Merraq and Sekhmet). They also learn that the computer system in the research facility is the facility. The entire building is one big computer.

Meanwhile on Earth, Dr. Gary Meyers, Barbara Shore, and General West are at the Arabian installation that controls the planetary anti-Ra defense system that the Setim had created millennia before, which has now come to be referred to as "Ushabti's Gift." Now-deceased Second Officer Nekhti's subordinate, Seventh Officer Ankhere of the Setim, has arrived. They have realized that when Abydos was under attack by Hathor, she had managed to cut off a StarGate connection to initialize her own, which means that there has to be some way to cut off the connection that the enemy forces on Ballas have established between their unknown world (Merimde) and Ballas. This would allow reinforcements through from Earth. The team begins to focus on devising the logistics of such a process.

Soon, they also discover missing circuits in the StarGate. It seems that Ra had left out certain bits in the schematics from the original StarGate when having later generations of Setim reproduce them for other worlds. That other circuit seems to be the basis for a three-dimensional means of communication between two StarGate-connected worlds. Seeing as how the Ballas Gate was built by the Setim and not one of the stripped-down models ordered by Ra in later years, they figure that if they can "fix" the Earth StarGate, they can connect to Ballas, since that Gate is already "fixed," so to speak. (Unfortunately, the Ballas StarGate is still buried in rubble.)

Meanwhile, on Ballas, the two groups of heroes are still separated, but Daniel is trying hard to find a way to reconnect with O'Neil's forces. The battles with the People continue, leading to more deaths on both sides. Finally, the Gate springs to life under rubble, allowing Myers to shoot a transmission through. Unfortunately, it is just routed to the Predecessor research facility, where Nefer (one of the Abydan translators) answers. There's no way to send actual reinforcements through.

Luckily, they are able to use the transmission to send information back and forth about the Predecessor's technological symbols, which allows Myers and the others to come up with a new plan. They've discovered information about matter transmission, much like the set-up that Ra had on Abydos, where they can use transport rings to "beam" things up to a predetermined distance, such as to a starship. In this case, they use the beaming technology in the middle of an open field, and "beam" the vast majority of People troops right up into the planet's radiation belt, killing them and sending the People troops into chaos.

Amid the chaos, Merraq orders a full attack, which is basically a suicide run. In response, Sekhmet kills him. When another Successor wounds her for doing so, she is on the ground just in time to see humans coming and call out to them in the Predecessors' language that they surrender. She speaks to all of the other People, and they all surrender. The battle for Ballas is won.

In the aftermath, O'Neil and the soldiers all return to Earth (courtesy of a StarGate that is dug back up by the People prisoners), as does Daniel. He and Sha'uri will keep things open between them for now, hoping to rekindle their relationship during missions as translators between Earth, the Abydans on Ballas, and the People culture. As for the Abydans, they will remain on Ballas. This is their new home. (We can only assume that the Setim will soon get their own colony as well.) All's well that ends well (and in a load of chaos, capped-off with a miraculous technological save).

I'm not quite sure what to say about Resistance. It is, for lack of a better term, the second half of one story, the one that began in Reconaissance. However, as Reconnaissance can be seen as one novel that ends in a cliffhanger (but which stands alone as that "one novel with a cliffhanger") Resistance does not, by any means, have the ability to stand on its own as a novel.

There is very little time in the tale when things aren't in chaotic battle or retreat stages. The character development is minimal for all but the new Successor characters, and it is filled with a handful of rather dull and un-involving subplots, such as the birth of the first Abydan child on Ballas to a retreating refugee woman.

Together, Reconnaissance and Resistance make a decent little story that ties up some of the loose ends left after the Rebellion / Retaliation / Retribution story arc. However, that's all that it is. It's loose ends, a little bit of new backstory for Ra's species, and a ton of running around, shooting at enemies that just don't get too involving (partially thanks to never giving them names, dialogue, or anything of their own in Reconnaissance. This made the leap into narratives on the "hoodat" side of things in Resistance a little jarring).

So, would it have been better if the StarGate novels had ended with Retribution? No, not really. Did we really get much out of the last two books, though? No, not really. Overall, though, the five-book (six-book with the film novelization) tale spun by McCay (and Devlin and Emmerich for the novelization) makes for an interesting look at a continuity that might have been, had Devlin and Emmerich not sold off the rights to the franchise, allowing Glassner and Wright to start the Stargate SG-1 continuity.

In a way, it's far more true to the spirit and characterizations of the original film than SG-1 has ever been. When you read about McCay's Jack and McCay's Daniel, you can't help but picture Kurt Russell and James Spader, rather than Richard Dean Anderson and Michael Shanks. Most fans of the SG-1 series, though, will likely tell you that the film was a good start, but it often can't hold a candle to Stargate SG-1.

Thus, I'd recommend this series to anyone interested in alternate continuities and the vagaries of the Stargate feature film. But if you're a diehard fan of SG-1 that can't stand the continuity problems between the film and the television series -- and you just plain wish the film could be twisted to fit the series rather than the other way around -- this novel series is not for you.