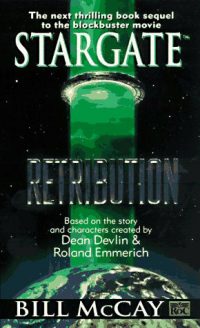 In the wake of a tragic war on Abydos, Daniel Jackson and Jack O'Neil bring refugees back to Earth. But with Hathor's powerful ship now on its way to Earth, there is no rest for the weary.

The survivors of the tragic war on Abydos stagger back to Earth through a smashed StarGate, through a storm of treachery, greed, defeat, and bitterness. Some are prisoners. Some are outcasts. All know the final war has yet to come.

The titanic, pyramid-shaped wrecking ball under the command of the goddess Hathor is hurtling toward Earth, bearing with it the power to enslave and destroy. And while the politicians argue, and the fighters of Abydos are held prisoner inside a Colorado mountain, renegade Egyptologist Daniel Jackson and fallen warrior Jack O'Neil must find a way to save their world. For in the face of Ra's magnificent war machine, Earth must now do what the Abydans could not: unite for its freedom and its life ...

This book takes place about a week or so after the events of Retaliation, but the story stretches to approximately one year after Retaliation, as Hathor arrives after her year-long trip to Earth in the novel's climax.

With the threat of an attack by Hathor aboard the Boat of a Million Years within a year's time looming, things take a sharp turn away from what we expect of StarGate fare.

Now on Earth, the Abydan refugees begin to be set up with outside jobs, outside places to live in small groups, and, yes, even jobs working with the government and military to translate the Abydan language and study the technology of Ra's regime. Kasuf is doing fine after his brush with death, while Skaara has taken a more active leadership role (such as it is in their displaced Abydan culture). As for Sha'uri, she's still very angry with Daniel Jackson, believing that he betrayed her with his interest in the student Faizah, who was later revealed to be Hathor herself.

As for the Earth men, Jack O'Neil is now working with General W.O. West in Washington D.C., trying to set up contracts with various technology manufacturers to come up with viable uses for reverse-engineered alien technology. Meanwhile, Daniel has spent his time blowing the secret of the StarGate wide open. He has gone to the media and proven the existence of the StarGate and the Abydan refugees, publicly urging the world to unite to prepare for the threat of Hathor. (Interestingly, the populace isn't going ballistic like SG-1 continuity characters always feared it would.)

Soon, Daniel is brought on to a project with Barbara Shore, Gary Meyers, and a still-upset Sha'uri. He's the "think tank" (Office of Bright Ideas) side of the operation, known as the Technical Advisory Group (or Technological Assessment Group, since they change the name less than 50 pages after it's first given). Operating under Colonel Travis, their goal is to create new applications for alien technology. This begins with a reproduction of an udajeet anti-gravity device for use with Earth military fighters.

Of course, Daniel is mostly removed from this activity, as he wants to stay clear of Sha'uri, and he has other problems to worry about. He has hired Miles Kirkwood, of the public relations firm Kirkwood and Stiles, to spend all the Abydan fortune on getting the public around the idea of uniting and standing up to Hathor when the time comes.

Meanwhile, Hathor continues on her way to Earth. En route, she has dreams and memories involving the destruction of the Setim and their leader Ushabti on Ombos millennia ago. She is worried that the Setim in stasis aboard the Boat will be a problem when they are finally awakened to help her use the Boat against Earth. She begins to systematically hide as much as she can of the truth, deep within the recesses of protected data files in the ship's computer.

Back on Earth, West and his underlings have devised a series of orbital defense platforms to protect against Hathor, which will use large energy weapons like those on Ra's Eye, along with traditional nuclear missiles. Those will be augmented by armed, refitted space shuttles (including the prototype, the Enterprise) and armed, refitted Mir and Freedom space stations.

Another success takes place at Kennedy Space Center, when the first test of the Technical Advisory Group's anti-gravity engine is a qualified success (launched nearly into space by a surge of power, but a working prototype all the same). Unbeknownst to them, though, the anti-grav experiment alerts a mysterious undersea sensor suite, which reactivates a millennia-old computer of some kind ...

Back aboard the Boat, Hathor awakens the Setim, but she tells them a lie about going to the rescue of Ra and others of the regime imprisoned by rebellious humans. This is told instead of the truth of what she suspects has happened, nor her role in the extinction of the rest of the Setim and their leader, Ushabti ...which raises the suspicions of Ushabti's son, Nekhti.

Meanwhile, on Earth, Daniel, working on behalf of the government and the "Abydos Foundation," hires Dr. Julius Moench, who has studied various unexplained mysteries of the planet. At the same time, Myers begins looking into other instances of early Egyptian (i.e. Abydan or Ra-influence) writings with "god technology" glyphs, hoping to link various myths-that-might-just-be-true into one cohesive history of what happened millennia ago. Soon, this begins to bear fruit.

Even as a prototype space shuttle with the anti-grav propulsion system is blasted out of the sky by a beam emanating from the Bermuda Triangle (from that ancient computer system with numerous nodes across the world), they start to realize, via various artifacts and clues, that something is amiss, ancient and buried on Earth. Daniel, Myers, and others go to the Nile Delta to dig for whatever they can find on their latest lead ...only to be tracked by a group of Islamic extremists, who intend to killing them and seize anything they find.

The extremists get their chance in Saudi Arabia, but only after the team discovers a Setim-built facility in a dried-up riverbed, which acts as the control nexus for all of the setups all over the world and in space. They are an ancient anti-Ra protection system, meant to blast his ships out of the sky, if possible. Once the team is recovered (and the extremists pursuing them stopped), a few things change. Daniel and company return to Creek Mountain to study a type of harmonic resonance technology discussed in hieroglyphics (that ties into the StarGate itself) using space-borne resonators. West is removed from active command and sent to Creek Mountain.

But time is running out. Hathor's ship has been spotted on approach to Earth.

In space, a battle ensues. Earth-based ships fight fiercely, along with the Orbital Weapons Platforms, but the Boat of a Million Years has energy shields and is barely harmed at all. The Setim defense system finally helps them start dealing real damage, but a message from Nekhti to his supposedly captive (but actually dead) father causes it to stop firing (thanks to its artificial intelligence that is waiting for Ushabti's return).

In the meantime, the Creek Mountain group realizes that they can use the harmonic resonance technology to fine-tune the StarGate for a very short transit (such as one that would go from Earth's Gate to the one aboard the Boat). With Sha'uri somewhat seeing a hero in Daniel again, a boarding party, led by O'Neil, Daniel, Kawalsky and Ferretti prepare to board. The moment that the ship is in the right spot for transit, coaxed there by now-destroyed space shuttles, they use the Gate to get aboard.

Once aboard, Daniel meets Nekhti, and they begin plotting as Daniel reveals the truth about Hathor. Together, they unlock computer records, showing the rest of the crew the truth, and, in the meantime, discovering thousands of new StarGate coordinates. Finally, after a fierce fight between O'Neil and Hathor's Horus guard Khonsu (whom Daniel finally kills with two shots), Hathor and her guard Setim have the StarGate sealed off. Our heroes seem in trouble, even as Nekhti, having encountered Khonsu and been dealt a blow that will slowly kill him, activates a program to overload the engines. The ship will explode, but they can't escape.

Well, they couldn't escape ...until one of the Setim guards for Hathor becomes aware of the truth and shoots her in the back. Hathor dies, and the Earth personnel get as many Setim off of the Boat and down to Earth as possible for future relocation to a new homeworld. As for the Boat of a Million Years, it explodes over Earth, ending its threat.

As for our heroes, it looks like whole new vistas of exploration have been opened by these new StarGate coordinates. The sky is no longer the limit.

Wrought with far more Earth drama than I ever would've expected from this series, Retribution takes in the plight of Abydan refugees, the greed of the military industrial complex, strange phenomena on Earth (outside of just the Egyptian myths) and, of course, the revelation of the StarGate to the people of Earth. Complete with all of the political bickering, profiteering, and armchair quarterbacking that comes with a worldwide 24-hour news media.

This is a realistic interpretation of how our world would react to the StarGate and a Hathor-esque threat. It's at once realistic and satirical without those two concepts negating each other.

The threads laid down in Rebellion and Retaliation about the Ombos rebellion and the mysterious race that built Ra's technology for him finally bear fruit here in grand fashion. What we figured were throwaway references to past times that were meant to give some depth to the Hathor character become crucial plot points and part of a much larger tapestry than we were led to believe.

Until now, the StarGate novels seemed to be taking a far less epic, if not entirely non-epic approach to Stargate film spin-offs, a far cry from the galaxy-spanning adventures of Stargate SG-1. The discovery of the new StarGate coordinates aboard the Boat also expand the chances for epic drama.

And so, with a fairly cinematic and well-done third installment, McCay's first StarGate crisis, the threat of Hathor, comes to a close. But two more books remain. What might they hold in store for us?