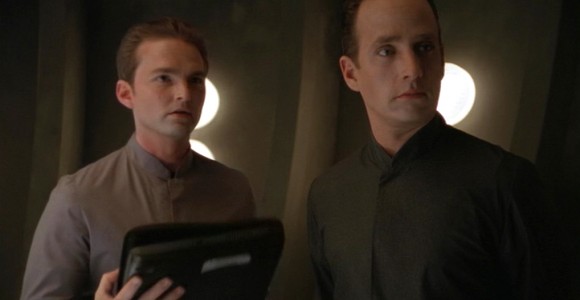 SG-1 encounters a potential new, technologically advanced ally in the war against the Goa'uld – though they do not know the dark secret of the Aschen.

SG-1 returns from a mission with the best news General Hammond could hear: they've completed the S.G.C.'s standing orders to acquire technologies that can defend Earth from the Goa'uld. Though their first mission to P3A-194 revealed only a farming town, the Volians have introduced them to their friends – a technologically advanced race that wants to establish a treaty with Earth, and share their technology. They are called the Aschen.

The team prepares to return to the planet with an ambassador – a young man named Joseph Faxon, who will represent Earth's interests and establish formal diplomatic relations with the Aschen. He's a bit out of place, wearing a business suit and carrying a briefcase to the farming planet. Samantha Carter likes him right away.

They are met near the Stargate by Borren, a humorless Aschen who greats them coldly and takes them to a transportation platform, which sends Borren, Colonel Jack O'Neill, Carter and Ambassador Faxon to one of the massive Aschen harvesters moving a few hundred feet over the surface of the farmlands (which automatically harvest the Volian fields and deliver the crops through the Stargate to the Aschen homeworld).

Dr. Daniel Jackson and Teal'c, under orders to "dig a little deeper" and find out more about the Aschen, go to speak with a local villager named Keel. He has nothing but good things to say about the Aschen, telling them that he was even raised by an Aschen family. They use their technology to help the farmers.

On board the harvester, Borren introduces the delegation from Earth to the Aschen ambassador, Mollem. He has good news for them: the Aschen offer not only their advanced technology (including a bio-weapon that targets an enemy's specific genetic pattern, and could no doubt win the war against the Goa'uld), but membership in the Aschen Confederation. It is a group of worlds whom the Aschen have united together, and with whom they share technology.

They ask relatively little in return. The Aschen have discovered very few Stargate addresses, and request that Earth shares the secrets of gate travel (addresses obtained from Abydos and the Ancients' library) with them. They also require that any treaty with Earth must be with all of Earth; the Stargate's existence must be revealed to the world.

O'Neill is uneasy with the negotiations, especially when Mollem expresses concerns that Earth's population growth is unsustainable.

On Keel's farm, Teal'c and Daniel have offered to remove iron root from the ground. But what they find is a massive iron pillar sticking out of the ground. They partially un-bury it and climb down, discovering a huge underground city – a city far more advanced than the Volians are now. It was equivalent to the United States in the early decades of the 20th century. The Volians have not always been farmers.

O'Neill, Carter and Faxon return to the S.G.C., where Hammond gives them even more unsettling news. Before they left, Carter programmed the computer to try and pinpoint the location of the Aschen homeworld (using the location of the Volian planet and some assumptions about stellar drift). They were unwilling to divulge the information until after the treaty is signed, as they have no iris or other way of protecting themselves.

Now, the computer has determined that there is a one in four chance that the Aschen homeworld is P4C-970 – a planet that Hammond ordered locked out of the dialing computer seven months ago, after receiving a note through the Stargate warning them not to go there ("2010"). Blood on the note tested positive as Colonel O'Neill's, and the reigning speculation is that the note was sent from the future.

O'Neill and Carter return to the planet when they learn that Jackson and Teal'c haven't checked in yet. The two have found a series of old newspapers in the library of the buried city. While Daniel can't completely translate the headlines, the photographs speak volumes: one shows a group of rioters.

SG-1 returns to Earth, and Daniel nearly finishes translating – but there is one word he can't figure out. Shortly after the Aschen arrived, there was a flu pandemic. The Aschen distributed a vaccine that saved them – but it apparently had a side effect. "Vaccine causes _______" is the headline on the final newspaper, implying that the paper was shut down the very next day.

As Daniel points out, the Volians went from a thriving metropolis of millions to an agrarian civilization of thousands – after the Aschen supposedly saved them.

With diplomatic efforts proceeding to the next level, Colonel O'Neill decides to visit the President. But when he arrives in Washington, D.C., he is intercepted by Senator Kinsey. He rebuffs Jack's attempts to convince the President not to pursue relations with the Aschen. In fact, Kinsey himself has been put in charge of the final stages of the negotiation – and expects that this treaty will propel him to the presidency himself. And the supposed "note from the future" be damned.

O'Neill returns to the S.G.C., defeated. But the team has one more plan: Jackson writes the untranslated word on a piece of paper, and gives it to Sam. Only she will be allowed to accompany Ambassador Faxon to the next meeting with the Aschen, at the order of Senator Kinsey. She takes advantage of the few minutes she has in gate room with Joe to fill him in on the plan.

On board the harvester, Faxon hands Mollem a laptop computer – which contains the Stargate addresses for 10 different worlds, as a gesture of good faith in the continuing negotiations. Mollem is quite pleased. But Sam hands the piece of paper to Borren, and asks him to translate the word written on it: "sterility."

Mollem is surprised, and realizes that the Aschen plan to conquer Earth has been foiled. Carter confronts him, but he takes the Stargate addresses and leaves her and Joe locked up in the meeting room.

Carter hears the Stargate dialing on the surface below, and sees that they are dialing Earth. She ties a rope to the harvester and rappels down, hoping to escape with the ambassador. (The gate is programmed to turn horizontal for the harvester.) The gate is activated and Carter transmits her iris code – just before she sees a massive bio weapon emerge from the Aschen harvester. She yells up to Joe, telling him to follow her – but he is struggling with Borren, and tells her to go without him.

Reluctantly, Sam cuts the rope and falls into the Stargate, flying out the other end and ordering the iris closed. The Aschen attack is averted, though Ambassador Faxon is lost.

Kinsey is livid, believing that O'Neill and company deliberately orchestrated events against him. But the team thanks Major Carter for a job well done.