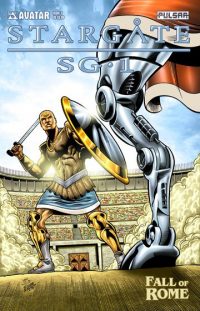 Teal'c must do battle with a group of cybernetic monsters in Mars' arena, while Daniel and his new allies attempt to rescue the team before Carter and O'Neill become Goa'uld hosts.

Teal'c is thrown into the futuristic gladiator arena to face the Legends -- monsters from mythology crafted into cybernetic killers. Captain Carter and Colonel O'Neill are imprisoned and being prepared to for Goa'uld possession. Daniel must face an ancient Goa'uld exile in hopes of rescuing the team and averting an all out attack on Earth. Everything comes to a head as the team faces certain death and the potential annihilation of the planet. Can SG-1 find a way to save themselves from the new dawn of the Roman Empire or will all of civilization fall beneath the heel of Mars? From Avatar Press We pick up where Fall of Rome #2 left off, as Jack and Sam are held by Mars and must watch as Teal'c and Areleus are forced to battle the Legends in the Kar'tek arena. Unfortunately for Mars, he hasn't bet on Teal'c's prowess in battle. Teal'c cuts down the Medusa and Minotaur. When he is about to be dealt a death blow by the Hydra, several Senators leap down into the arena with staff weapons and begin blasting away, saving Teal'c. Meanwhile, Daniel and Etahy have found Ulysses, who is not only an Unas, but a symbiote-hosting Unas. Not only that, but he is a Tok'ra! Ulysses gives Daniel a device that will give him five minutes of phasing time, like what the Volca do naturally. The race to rescue SG-1 is on ... Elsewhere, Teal'c confers with the senators, who reveal that they are dependent on Goa'uld larva. They are not just red versions of the same kind of Jaffa robot that Mars created. They are exoskeletons that hold dinosaur-like Mar'kak, which in turn host Goa'uld symbiote larva, in Jaffa fashion. Since Mars couldn't use the Mar'kak creatures as suitable hosts and Jaffa, he used the same process on their physiology, but put them inside exoskeletons to bulk up their size and abilities to Jaffa-level. Thus, it would seem that all of the senators and robo-Jaffa are these strange, hybrid beings. At any rate, they are captured and brought before Mars, as are the already-captured Sam and Jack. Conveniently, though, this puts them all in one place when Daniel and a few Volca phase through the wall of the chamber and take out the Jaffa. In the commotion, Teal'c tries to take out Mars, but is brought to his knees. He is saved, however, when Etahy phases his hand into Mars' chest. Mars is not a living human with a Goa'uld in his head either. He is, in fact, a Goa'uld inside a Mar'kak creature's head (inside a much more human-like exoskeleton) ... and Etahy's hand has phased a hole through the exoskeleton and the Mar'kak Mars' chest, killing the host. SG-1 has helped liberate Kar'tek, and they return home as heroes ... but even as they do so, one of his followers opens his own exoskeleton, removes the Mars symbiote from the Mars Mar'kak, and implants it in his own body, allowing Mars to live on to plot revenge for another day ...
- N. Butler