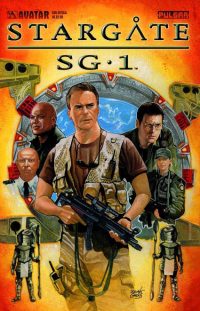 Teal'c and Bra'tac are pinned down by enemy fire, giving the humans of Earth a chance to demonstrate their mettle to the Jaffa leader.

Pinned down by enemy fire Teal'c and Master Bra'tac face certain death. The only thing standing between their capture and execution as traitors to the murderous Goa'uld Apophis is Colonel Jack O'Neill and the SG-1 team. Can the upstart warriors of Earth save the fledgling resistance movement or will the hopes of freedom for the Jaffa be crushed beneath the boots of Goa'uld oppression once and for all? From Avatar Press The text states that the issue takes place after "The Serpent's Lair". No further clues are evident, but it would seem to be before "Family", since Bra'tac's attitude seems to be driven by the events on Apophis's Ha'tak, which would make sense if this were his first involvement with SG-1 since those events. That puts between episodes 1 and 8 of Season Two, likely just before "In the Line of Duty". SG-1 again battles the forces of Apophis on Chulak. While Daniel, Teal'c, and Bra'tac go head-to-head with Apophis's Serpent Guards in their own barracks area (and Bra'tac doubts O'Neill's plan to defeat their foes), Jack and Sam are in the barracks hangar (or in a Ha'tak hangar -- it's never made clear where they are), setting explosives. When the outside trio find themselves pinned down by incoming death gliders, Jack and Sam steal a glider of their own and take out the offending ships from behind. Bra'tac has to admit that the humans are fools ... but brave fools.
- N. Butler