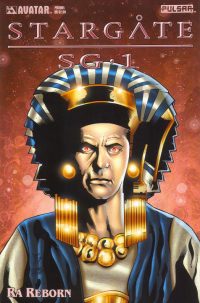 As Daniel Jackson recounts the story of the first Stargate mission, a familiar presence reappears on Abydonian soil. Has the evil System Lord Ra returned?

The SG-1 team must face their ultimate foe once more! For thousands of years one System Lord ruled the many factions of Goa'uld spread throughout the universe. His rule was unwavering and all who dared oppose him were torn asunder by the fury of his wrath. He was Ra, the sun god, and all-knowing overseer of the entire Goa'uld race. When Jack O'Neill and Daniel Jackson first traveled through the Stargate it was their unexpected resourcefulness that ultimately led to the downfall of this most prolific of despots. Transporting a naquadah-enhanced nuclear warhead into his throne room the destruction of the self appointed lord of the god was witnessed by the entire population of Abydos. Or was it...? As Daniel Jackson recounts the story of the first Stargate mission, a familiar presence reappears on Abydonian soil. Has the most feared Goa'uld of all time been reborn from the ashes to terrorize the universe again? The longest running hit sci-fi series on television blasts into 2006 with a titanic new series that features the return of Ra! From Avatar Press