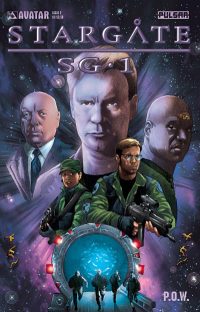 While SG-1 struggles to find a way to remove a doomsday bomb from the Stargate, Dr. Jackson recounts the history of the program.

Colonel Jack O'Neill is a Goa'uld prisoner of war. The S.G.C. is under lockdown. An alien device threatens to turn Cheyenne Mountain into a smoking crater. It's a race against time as General Hammond and the rest of the SG-1 team try to find a way to rescue O'Neill and disarm the Goa'uld doomsday device. This special issue introduces readers to the rich back-story of the Stargate universe and the SG-1 team as well as cranks up the tension! From Avatar Press P.O.W. resumes where the first issue left off. Klorel has Jack trapped on P7X-132, the S.G.C. Stargate is charging to explode, SG-1 can't go save O'Neill, and Ferretti remains in the infirmary. While SG-1 argues their case go to save O'Neill, Samuels arrives. As they prepare for an emergency briefing, Captain Carter begins to consider using a refrigerant to slow the gate's temperature rise, but they hope another, better solution presents itself. As for Jack, he is his usual flippant self in his imprisonment, even going so far as to make a MacGyver joke. The emergency briefing takes place. (It is more of a briefing for the new reader than for anyone involved). Sam suggests using an E.M.P. pulse to disable the device on the gate, knowing that it could possibly knock out the S.G.C. and N.O.R.A.D. above. Then, since the pyramid base found on P7X-132 is, according to Ferretti, similar to the setup on Abydos, that gives Dr. Jackson an excuse to rehash all of the major events of the first Abydos mission for us. Teal'c then rehashes the events leading up to the formation of SG-1. After the briefing, Sam's E.M.P. idea works, sparing them all from destruction. Later, after talking with Ferretti (who Fraiser acknowledges spends more time in the infirmary than in the field), General Hammond tells Samuels to essentially "kiss off," and prepares to send out a multi-team rescue effort after Jack.
- N. Butler