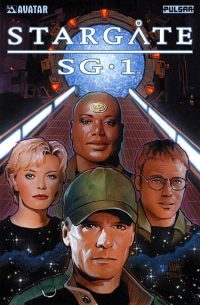 The S.G.C. faces an invasion by the Goa'uld, who lay waste to the Gate Room.

Reconnaissance has discovered an alien invasion force with plans of conquest for planet Earth. Caught in a firefight, the escaping team from Stargate Command unknowingly allows a mysterious serpent-headed Goa'uld Lord access into the S.G.C. The invaders lay waste to the debarkation chamber, while locking a naquadah-laced bomb onto the Stargate. In the resulting attack, Colonel Jack O'Neill finds himself on a distant world, face to face with a thousand Goa'uld warriors. With the S.G.C. under lockdown and O'Neill already a prisoner of war, the SG-1 team must find a way to remove a doomsday bomb from the gate and rescue him from a Goa'uld fortress. Join the SG-1 team for a full force adventure as they fight for survival against a race bent on subjecting the universe to their rule as the gods of legend. From Avatar Press P.O.W. starts on P7X-132, where SG-2 is fleeing from a horde of helmeted Serpent-armored Jaffa. Two members of the team are killed. The leader of SG-2, Captain Louis Ferretti, manages to get through the Stargate, gravely wounded ... Back at the S.G.C., General Hammond briefs SG-1 on their next mission, which is supposed to be to PC3-551, where a long-abandoned Goa'uld base needs to be investigated. They are interrupted in their preparations, though, as Ferretti emerges through the Stargate, followed by three Serpent-armored individuals. Two are simply Jaffa, but the leading individual (eerily reminiscent of Apophis in "Children of the Gods") wears golden armor. S.G.C. personnel are taken out before Teal'c can take out the two Jaffa. The golden-armored Jaffa, though, uses his hand device to reactivate the Stargate and open the iris. He then places a small device on the gate before escaping through it. Daniel Jackson recognizes that the pseudo-Apophis could only be Klorel -- the Goa'uld who has taken their friend Skaara as its host. At this revelation, O'Neill leaps through the Stargate after his old friend before the ring disengages. Hammond refuses to let SG-1 immediately follow, but they have a bigger problem at the moment. They find that the device Klorel put on the Stargate is charging to explode. If they can't remove it in time, the Stargate will destroy the base. As for Jack, he finds himself alone on P7X-132, held at the mercy of Klorel's hand device ...
- N. Butler