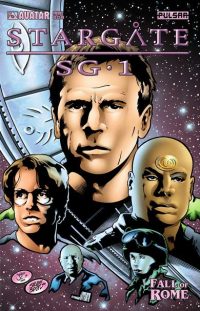 The team finds a device that reveals the fate of the ambitious Goa'uld Mars.

The SG-1 team finds a vo'carr device that reveals the story of an ancient Roman Goa'uld that assumed the guise of Mars, god of war. When activated, the team learns the treachery laden fate of one of the most powerful and ambitious System Lords ever. Join Jack O'Neill, Samantha Carter, Daniel Jackson, and Teal'c as they discover that Rome wasn't built in a day, but it could be destroyed in one. From Avatar Press Fall of Rome begins with SG-1 on an unnamed planet, where they are fighting Jaffa loyal to Apophis, who are guarding a temple that evidently has nothing to do with Apophis. Once the Jaffa are defeated, SG-1 discovers a vo'carr (sort of like a vocuum from "Rules of Engagement" but for housing historical holograms). The vo'carr tells the story of the Goa'uld (and Greek god) Ares, whose son, Phobos, tried to usurp his power. Phobos had been sent away, and when he found himself amid the Romans, he assumed the mantle of God of War (Ares' title) and ruled them under the name Mars (the Roman version of Ares). When his own followers finally betrayed him, "Mars" was returned to Ares, then banished through the Stargate to the "traitor's graveyard," the planet Kar'tek. After learning this intriguing new information about this "new" Goa'uld, SG-1 leaves the world before more Jaffa can arrive. The stage is set for Fall of Rome.
- N. Butler