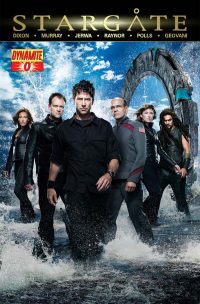 Dynamite Entertainment solicited "Issue #0" to be published in October 2009, but from what we can tell this issue never made it to print. It is included here for informational purposes. In 2009 Dynamite announced that it had acquired the license to publish Stargate comic books and would be doing a three-stage launch of series featuring the characters from all three television series: Stargate SG-1, Stargate Atlantis, and the about-to-launch on television Stargate Universe. This was to be billed as a "Season 11" for SG-1 (written by Battlestar Galactica comic writer Brandon Jerwa, and "Season 6" for Atlantis (by Doug Murray), as well as an SGU prequel (written by G.I. Joe's Chuck Dixon). The "Issue #0" preview was meant to tease fans about what was to come, with three short stories and a low cover price of $1.00. While Dynamite published two SG-1-based series in 2010 (Vala Mal Doran and Daniel Jackson), the rest of the series never materialized and the publisher's turn with the franchise was done -- after only nine issues.