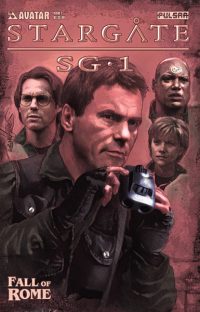 Daniel searches for a way to free his team from the Goa'uld Mars, who has created an army of cybernetic Jaffa in order to one day invade Earth.

SG-1 comes face to face with the banished System Lord Mars and discovers an incredible buried secret. Lost for over 2,000 years without a suitable host, the Goa'uld exiles created an entire race of cybernetic creatures to do their bidding. Now this scorned god plans to lead an army of robotic Centurions through the rediscovered Stargate and lay ruin to Rome and beyond. Can Daniel find a way to free Jack O'Neill and Sam Carter before they become the unwilling human hosts of this insane deity? From Avatar Press We pick up where Fall of Rome #1 left off, as SG-1 (minus Dr. Jackson) are taken into the heart of a Roman-style city on Kar'tek, the Goa'uld graveyard world. Meanwhile, Daniel remains hidden away with Etahy, a member of the phase-shifting race called the Volca. As O'Neill, Teal'c, and Carter spend time mouthing off with the robotic Jaffa loyal to Mars, Daniel learns from Etahy that they gained their powers to be "one with the rock" (the phasing ability to travel through the world's rock itself) from a hero that was exiled by "the masters" (the Goa'uld) to Kar'tek long ago. That hero was Ulysses, the great hero of Roman myth. To save SG-1, they must travel through the planet to find Ulysses. Meanwhile, the lead robot Jaffa, Augustus, brings SG-1 before the Goa'uld Mars (a.k.a. Phobos, son of Ares). As was told in the preview, Phobos tried to usurp his father's power as the "God of War" by proclaiming himself "Mars." He was punished with banishment to Kar'tek, where the found no suitable hosts -- the Volca aren't useful and the only other lifeforms, the mar'kak, are baby dinosaur-like creatures. Instead, he had to create the robot Jaffa to serve him, and he has remained in a very old body since then. He is still referred to by some here as Ares, rather than Mars, and he rules similar to the setup in the Roman Empire, in that there is still a Senate (made of red, robotic-looking individuals, including the questioning Areleus) that he must heed at times. As Teal'c and Areleus are put inside the Coliseum to do battle for their lives, Daniel and Etahy find Ulysses (who turns out to be an Unas), but he seems reluctant to help. The story ends as the Legends (three robotic mythical creatures: a hydra, a minotaur, and a medusa) emerge to take on Teal'c and Areleus ...
- N. Butler