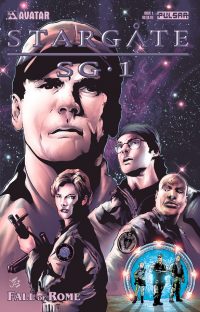 SG-1 discovers a Goa'uld graveyard world to which the once powerful Mars has been banished, where they encounter an oppressed alien race.

Following ancient clues found on a remote world, the SG-1 team travels to a Goa'uld graveyard that has a deadly hidden secret. Banished for over two thousand years, a rogue System Lord called Mars has cultivated an entire civilization with one purpose -- to travel back to Earth and lay waste to it. Can SG-1 find a way to keep a world of cybernetic Goa'uld bent on enslaving the human race from completing their conquest of Rome and beyond? In Stargate SG-1: Fall of Rome #1, Jack O'Neill, Samantha Carter, Daniel Jackson, and Teal'c discover that while Rome wasn't build in a day, it could be destroyed in one! From Avatar Press Fall of Rome picks up where its prequel left off (albeit at least a few episodes worth of time later), on the planet hinted at in that tale ... Kar'tek, the Goa'uld graveyard world, known to the S.G.C. as TC9-173. As our tale begins, a family of yellow-skinned, bald aliens (the Volca) run for safety from pursuing Jaffa-like soldiers. The aliens have the power to essentially "phase" through solid matter and to travel through the planet's rock itself. This time, when they phase through to save themselves, they discover the planet's long-lost Stargate. Unfortunately, when they are finally discovered and captured by the Jaffa-like soldiers, the encounter reveals the Stargate's location to the local Goa'uld as well. The soldiers only look like Jaffa in the sense of being Goa'uld henchmen with staff weapons and head symbols (in this case, an omega from the Greek alphabet). However, these soldiers are robots, not living beings, and they dress in the garb of ancient Rome. On Earth, at the S.G.C., General Hammond briefs SG-1 on M.A.L.P. info from Kar'tek, where they caught a picture of the phasing aliens. Knowing that this could be similar to Tollan technology, they decide to go take a look. Once on Kar'tek, they meet Etahy, one of the phasing Volca, but soon come under fire from the Robo-Jaffa. Daniel is pulled into the wall, phasing with Etahy, but the rest of SG-1 is captured by the lead Jaffa. SG-1 is taken to see the Goa'uld ruler of Kar'tek, Mars (the Roman "God of War," whom we know from the prequel is actually the Goa'uld Phobos -- the son of the Greek "God of War" Goa'uld, Ares). The team (sans Daniel) is marched toward a large Roman Empire-esque city ...
- N. Butler