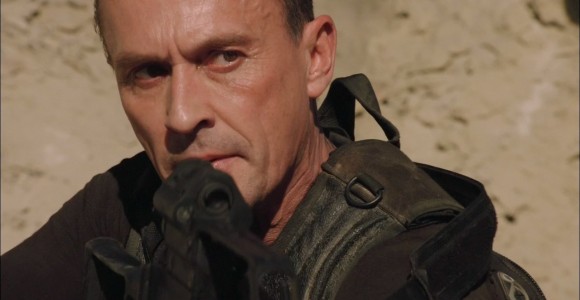 Simeon makes his escape from Destiny, sending Nicholas Rush on a vengeful mission to catch him. But Young and Greer must attempt to retrieve Simeon unharmed.

Having found the coherent signal in cosmic background radiation ("The Greater Good"), Adam Brody, Dale Volker, and Lisa Park discuss the implications of this discovery with Colonel Everett Young. Significant as the discovery is, they are not eager to forgive Nicholas Rush for the many secrets he has kept.

Destiny has emerged from F.T.L. flight near three planets. Rush, having come to the Bridge with Eli Wallace, offers to check viability. But Young tells Rush to go and rest, instead.

Eager to be with Dr. Amanda Perry before she returns to her body on Earth, Rush goes back to Ginn's quarters. When she doesn't answer, he opens the door. The woman lies dead on the floor.

As Lt. Tamara Johansen examines Ginn, 2nd Lt. Vanessa James uses the communication stones to contact Earth. Dr. Perry died when Ginn was murdered, since the two were connected using the Ancient technology. Among the Lucian Alliance prisoners only Simeon is unaccounted for. His guard, Michaels, is missing. Retreating into the corridor, Rush's pain and anger escape in an anguished scream. Eli, still in Ginn's cabin, wants a gun.

The missing Simeon uses Michaels' weapon to shoot his way into the armory. Rush follows the trail of wounded soldiers. Arming himself, Rush reaches the gate room just as Simeon takes Park hostage and orders Volker to lock the doors. Volker volunteers to replace Lisa as his hostage. But Simeon forces Volker to dial the Stargate and drags Park through the event horizon. When Brody unlocks the gate room door, Rush follows them through the gate.

MSgt. Ronald Greer locates the murdered Michaels. Lt. Matthew Scott's team finds an injured Airman Dunning before advancing to the gate room. The Stargate is re-dialing the planet when Colonel Young joins Scott. Homeworld Command has informed them that, according to what Ginn said before she died, Simeon knows vital details of the Lucian Alliance plan to attack Earth. He should be taken alive.

On a stark, desert world, Dr. Rush finds Park sitting bound and terrified near the base of the Stargate ramp. Simeon has attached an Alliance bomb to her back and disappeared into the nearby rocks, where (unbeknownst to Rush) he has a high-powered rifle trained on them. Warning everyone to stay on Destiny, Rush examines the device.

The bomb can't be disarmed, but the proximity sensor can be removed. For a moment, it seems Rush doesn't have the tools he needs. Park tells him to get away while he still can. But Rush finds a small, pointy tool in the arm of his repaired reading glasses, and disables the sensor. Once the bomb disengages, Rush heaves it away before it explodes. Intent on killing Simeon, he starts after him. Lt. Scott and a team arrive through the gate and follow Rush. Simeon pauses to shoot at them.

Spotting another explosive on the rock face, Rush and Scott escape unharmed. As Greer joins them, Scott explains that Simeon is to be captured – countless lives on Earth may depend on what he knows. But Rush doesn't care. He is out for revenge over the murder of a woman he cared about deeply, and he doesn't believe they could get anything useful out of Simeon anyway. Scott dispatches other search parties. Lt. James's team is to guard the Stargate while Scott and Greer accompany Rush.

Meanwhile, on Destiny, Young stops in the Infirmary. T.J. and her staff are trying to save those Simeon wounded. Young also visits Varro, leader of the Lucian Alliance prisoners. Varro swears that since Simeon's clan is behind the attack on Earth, only he knows the specifics. Young returns to the Infirmary. All but one have been saved.

On the Bridge, Park returns from her ordeal ready to work. She, Brody, Volker, and Eli struggle to stall the ship's countdown clock, to give the teams more time to capture Simeon and return. Destiny eventually does jump back to F.T.L. flight, but will reemerge still within dialing range of the planet's Stargate.

In her quarters, Chloe works on Rush's equations, trying to keep her mind occupied. She tries to tell Eli, but full of anger and grief over Ginn's death, he ignores her. He also snaps at Volker and rebuffs Park's attempt to comfort him.

Rush, Scott, and Greer press on. Finally, adrenaline depleted, Rush stops. Grief overwhelms him. Scott offers consolation, but Simeon interrupts by shooting at them. James and her team attempt to flank Simeon. Remembering that Simeon has a kino remote, Rush fiddles with his own remote. He warns James about a bomb in time to save the team from sustaining anything more than minor injuries.

Using the remote, Rush tracks Simeon. Greer shoots the Alliance operative in the leg from a distance, but Simeon escapes only to shoot Greer. Scott is forced to take Greer back to the Stargate, while Rush continues the pursuit alone.

On Destiny, Eli asks Colonel Young for a gun so he can join the hunt. But Young points out that Eli is no killer, that killing would change Eli forever. Reluctantly, Eli returns to the Bridge.

Young brings Chloe to the Bridge. She believes she is starting to understand Rush's equations. Against everyone's better judgment, Chloe is allowed to sit at a console. Before long, she's manipulating controls. Eli stops her, but not before she plots a return course and turns Destiny around.

Rush spots the wounded Simeon fleeing across an open span of desert, at the same time that he sees a herd of large animals spotted on the planet earlier. Setting an explosive of his own, Rush shoots at Simeon, missing him. Simeon returns fire and heads back toward Rush. Taking cover, Rush waits until Simeon has no place to take cover, and triggers the C4 he has placed some distance away. The creatures are startled and stampede through the open corridor, trampling Simeon.

With one bullet left Rush approaches a mangled Simeon, who plays the "I have information" card to try and get Rush to spare his life. Rush shoots him dead.

Because of Chloe, Scott and the others are still waiting at the Stargate when Rush returns. Scott asks Rush if killing Simeon helped. An exhausted, blank-looking Rush does not answer as they head back to Destiny.