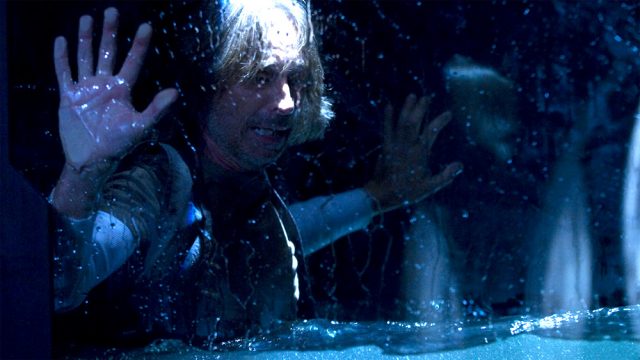 Destiny is under threat, as an alien foe finds a way to board the ship and make a mess in the first season episode “Sabotage.” Then, Stargate Universe explores the dark corners of its characters’ psyches in “Pain.” How did these two episodes strike you when you first saw them — and what do you think of them now?

Sara’s adventure through SGU‘s first season continues! (Check out past entries in this series here.) 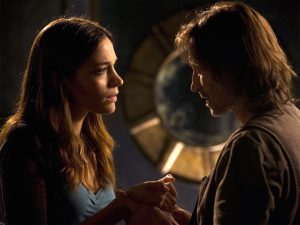 Amanda Perry is reunited with Nicholas Rush. From “Sabotage”

I know I was down on the last couple of episodes, but I’m ready for SGU to be awesome again. Every show has their clunkers — it’s just part of churning out 20+ episodes a season. “Sabotage” already starts with a very significant act: Colonel Young chooses to not shave. Being clean shaven is part of military regulations, and his choice to forgo that is pretty significant. Young is giving up.

Meanwhile Scott and Co. are still in the Land of the Lost.

The Destiny is still in power save mode.

And, oh — the ship doesn’t have enough available power to make it to the next galaxy.

To help improve the functionality of the F.T.L. drive the crew uses the communication stones to bring an expert in to help.
The catch is that the engineer from Earth is quadriplegic. Camille volunteers to switch bodies with Dr. Amanda Perry, the engineer, and gets to visit her wife Sharon again.

The Destiny suddenly drops out of F.T.L., causing a stomping-on-the-breaks-not-wearing-a-seatbelt wave of minor injuries amongst the crew. (Seriously, a race smart enough to create F.T.L. space travel but not smart enough to put in seat belts? I think Jackson was onto something with that comment.) But, when an incoming wormhole connects, it appears the Destiny came to a screeching halt to let Scott and Co. dial home. 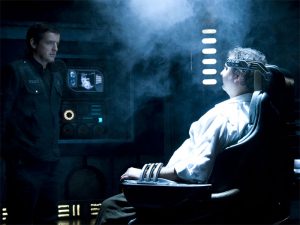 Dr. Amanda had a thing for Rush back in their university professor days, so she’s all smiles and giggles to get to work with him. I wonder if she’ll become a recurring love interest for him, or if she’ll have some unrequited love to deal with. He seems a bit conflicted when she makes her move. A part of him is interested, even if he’s not ready yet.

Three weeks later, the ship is stuck at a standstill, there are aliens with ships waiting on the other end of the Stargate (the only location we can dial), we’re running low on rations — but life must continue while we try to repair the ship.

Vanessa James has been having recurring nightmares and has discovered they the Destiny stopping may not have been the actions of a semi-sentient ship, but something that James did. She had tried to make the switch with Amanda and couldn’t do it, so her imprint was still on the communication stones … and the CGI BlueBugs may have used that as an opportunity to sabotage the ship by switching places with James.

So now the CGI BlueBugs still have a connection to the Destiny and know where they are. The crew must prepare for a probable attack and boarding. Our only possible means of defense is the chair. Dr. Franklin (maybe) volunteers to sit in the chair again and help with repairs while the attack happens.

Anyway, the F.T.L. drive gets repaired mere seconds before the CGI BlueBugs can mount a meaningful attack or board the ship. But, more importantly, I think Rush is coming around to the idea of maybe starting something romantic with Amanda — and I may have a new ship.

Also: Franklin straight up evaporated in the chair. Poof. Gone. 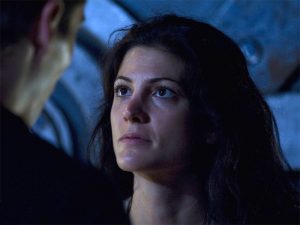 Vanessa (Julia Benson) is tired of your s—.

Remember the joke in episode “200” of SG-1 about making Wormhole X-Treme! “Younger, hotter, and sexier?” Every time there is a sex scene in SGU, I think of that line.

As soon as Lt. James smashes Matthew Scott over the head with a lantern I know this is some sort of set up. I totally bought into the idea that they were still sleeping together. I totally bought their argument. But as soon as it went from verbal to physical … I knew something was up.

Everyone on the ship is having some sort of non-reality-based experience. I know that much. Greer thinks he saw Camille messing with personnel files and conspiring with Rush in the gate room. Scott thinks his son Matt is on the ship. And random Red Shirt Airman thinks a snake is crawling under his skin.

At first, I wondered if Franklin poofing into oblivion in the last episode has anything to do with it. But I am very wrong, it seems. Alien ticks have latched on to people’s scalps, causing hallucinations. When T.J. tries to remove the tick on Scott’s scalp he crashes and passes out — and the tick digs in deeper.

I grew up camping. Earth ticks are no joke. Outer space ticks make my skin crawl. (Also, I have to say that the franchise has come a long way with their space bugs, compared to episodes like “Bane” and “Thirty Eight Minutes”). Especially when it turns out the space ticks can jump hosts. For the record? That is not okay. 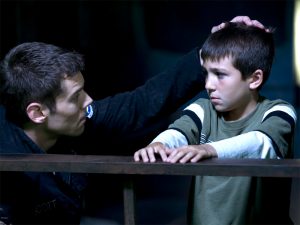 Lt. Scott hallucinates his son, whose existence back home on Earth he only recently learned about. From “Pain”

T.J. uses the alien anesthetic to tranquilize the ticks to remove them, but with them jumping from host to host it’s not going to be easy to smoosh them all.

Greer’s hallucination is that Rush and Camille are conspiring (again) to take over the ship. His hallucinations go from visual to auditory as he believes Young gave him permission to use lethal force to stop them. The tension of Greer hunting Rush, while Rush thinks he’s running from the CGI BlueBugs, is awesome. The real Camille gets caught in the cross-fire, and is both stabbed by Rush and held at gunpoint by Greer.

Then things get uber real when Papa Greer shows up to encourage Lt. Greer to kill Camille! Rush gets brave and attacks what he thinks are the CGI BlueBugs. He saves Camille.

This episode reverberates deep with the events of past episodes. We’re also still dealing with the fallout of the failed mutiny and alien attacks. And now everyone must also deal with the ramifications of their hallucinations and the fallout they had on their non-hallucinating crew mates.

I’m surprised they haven’t brought back Franklin in some way. Every time something happens that is vaguely strange I assume Franklin is involved somehow.

“Pain” is full of twists and turns, and SGU is back in the swing of things. I am once again completely enthralled by the story-telling going on, and am changing discs and hitting play as quickly as I can. What’s next?

In the Next Installment: The Lucian Alliance plot to invade the Destiny in “Subversion,” and someone on the inside could be working with them!

Franklin did indeed go “poof” and what an intriguing piece of science fiction. As for Rush, again the nuances in the character as written and performed, majestic.

Very astute observations by Sarah. I think the season finale is when the show really starts paying off for people who stuck with it, so should be good times for Sarah coming up.