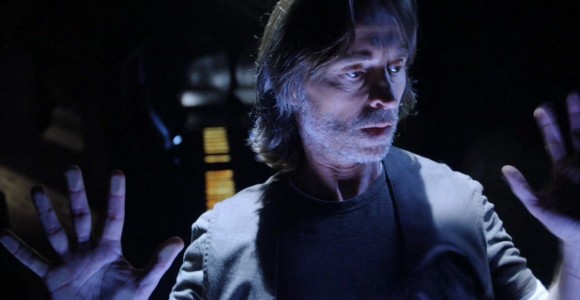 The ship's crew is plagued by hallucinations that manifest their fears and desires.

Lt. Matthew Scott dresses hastily after sex with Vanessa James. Unsatisfied and clearly bothered that he is leaving so quickly, James dresses as well. They argue and, when he attempts to leave, she blocks his way. They struggle. James hits him hard on the back of the head with a table lamp, and Matt falls to the ground, blood running onto the floor. He is dead. Distraught, James huddles on her bed and sobs.

Elsewhere, Dale Volker tries to leave his quarters but finds that the door won't open. He tries again and again. He pounds on the door, yelling for help. Sgt. Hunter Riley, passing by in the corridor, opens the door. Riley steps inside and tries the suspect door mechanism. The door responds immediately.

An upset Volker rummages in his bag as he proceeds down the corridor. Suddenly, his way is blocked by a wall of pipes. At every turn, pipes spring up. The illusion is dispelled when Lt. Scott calls to him. As Volker moves on, Scott sees someone running. It's his son, Matthew, who he recently met on Earth ("Life"). Scott follows until he runs into Chloe. People are clearly seeing things that are not there.

MSgt. Ronald Greer spots Camille Wray working at the console in the Gate Room. When he questions her about her activities, she defensively replies that she's updating personnel files and that Dr. Rush and Colonel Young are aware of her activities. But Greer suspects she is planning another mutiny ("Divided").

Airman Dunning stares at his arm in the Mess Hall. As his table-mates discuss the called-off search for the missing Dr. Franklin ("Sabotage"), they prepare to leave. Dunning rechecks his arm.

Meanwhile, Rush calls on Wray. Before he can explain why he's there, Young approaches. He asks about Wray's activity in the Gate Room. Wray adamantly denies visiting the Gate Room, and thinks that Sgt. Greer is out to get her.

A frantic call from Dr. Lisa Park brings Scott and Chloe to the workout room. Dunning is clawing at his arm, tearing his own flesh open as he tries to remove a snake he believes is moving under his skin. Scott subdues Dunning, but turns and sees his son again.

In the Mess, Chloe, Eli, Riley, and Greer are discussing Dunning's apparent breakdown. Greer stares at Wray and Rush, conferring quietly at another table.

Later, in the Control Interface Room, Rush spots movement in the shadows. Thinking it's Greer, Rush calls out. Adam Brody is nearby, and wonders who Rush is talking to. Resting in his room, Volker opens his eyes. The ceiling is pressing down on him, and he screams.

James has not reported for work in the Armory. An annoyed Colonel Young goes to her quarters. Finding her sobbing over her accidental murder of Matt, Young takes her to the Infirmary and radios Lt. Scott. When Scott reports that he has been seeing his son, Young realizes that Scott, Volker, Dunning, James, and Corporal Barnes comprised the last away team. Only Barnes is hallucination-free. They must have picked up something on the planet.

Lt. Tamara Johansen examines everyone again. She discovers tick-like creatures on all team members but Barnes. When she attempts to remove the tick from Scott's head, the creatures releases a toxin that almost kills him.

Paranoid about another civilian takeover, Greer spies on Wray. When he again sees her talking to Rush, he confronts them. But they deny any wrong-doing.

While passing by the shuttle, Chloe spots someone inside. She investigates and finds her father, Alan Armstrong, who died that first day aboard Destiny ("Air, Part 2"). She misses him greatly, and talks with him even though she knows that he is not real. They are chatting on the Observation Deck when Eli comes in. He wonders to whom she is speaking, and she explains, asking him not to tell anyone. Even though it is a fantasy, for her it is a good thing. She gets to see her dad again.

Reluctantly, he agrees – until Scott comes looking for her. Using the venom from the creature on the jungle planet ("Time") as a numbing agent, T.J. has successfully removed the ticks. Scott's was already gone, however. Surmising it may have jumped to Chloe, T.J. needs to examine her. Eli and Scott forcibly take Chloe to the Infirmary, where at least she can say a proper goodbye to her father.

Walking down a corridor, Rush suddenly finds himself encased in a glass tank that is rapidly filling with water – the same sort of tank in which he was held by the aliens ("Space"). His scream dispels the illusion. As he heads for his quarters, he spots one of the aliens – on board Destiny. Rush hides out in his room for a time, then goes to the Gate Room, where he witnesses four more of the aliens emerging from the active Stargate.

Wray leaves her cabin, and Greer is watching her. But he spots Rush at the end of the corridor and gives chase. Rush sees the two, but believes they are aliens. He runs into a storage room, searching for a weapon. Greer and Wray follow him.

In the Infirmary, T.J. realizes that away team members could have carried more than one tick each on board on their clothing. Young orders an immediate examination of all personnel. Greer calls the Colonel, asking for permission to use deadly force against the traitorous Wray and Rush. Stunned, Young sends Scott to find Greer – but Greer hallucinates Young's voice over the radio, granting his request. He implements radio silence.

Greer and Wray end up in the storage room. Greer disables the door mechanism. Seeing only aliens, Rush stabs Wray with a screwdriver. Wray needs medical attention and begs Greer to let her go, but Greer aims his gun at her head. Still seeing him as an alien, Rush attacks Greer. Lt. Scott arrives and uses C4 to blast open the door, and Greer and Rush are both subdued.

Before people and relationships can fully recover, Destiny drops out of F.T.L. flight. When Destiny dials the Stargate to a new planet, Colonel Young has a choice to make. Is it worth the risk to continue to explore these planets? After a moment, he orders another away team dispatched.