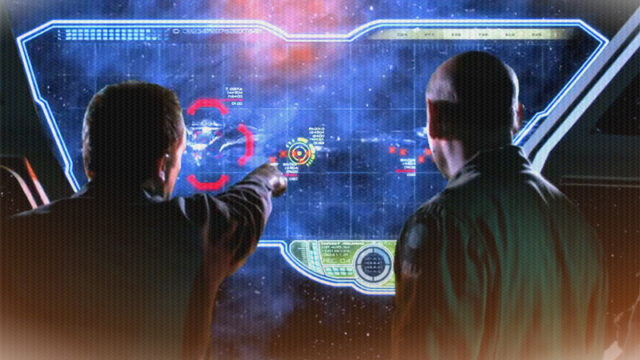 One thing that makes the Stargate franchise stand out as some of the best action-adventure science fiction on television is its epic space battles, including the great visual effects work that makes these sequences shine. And the best battles have weight to them — they matter to the story. They aren’t just pew-pew lasers and exploding space ships, but carry real consequences for our characters and how the storyline unfolds.

The Stargate franchise (so far) includes more than 350 episodes of television over three live-action, in-canon shows. There is certainly a lot to choose from here! But which space battles in Stargate history are the coolest … the biggest, most epic, highest stakes, and most entertaining?

In this list we’re looking for that perfect storm of great visual effects, meaningful consequences, and creative composition loaded with ship-to-ship weapons fire and diving, banking, and blasting dogfights.

So raise the shields! We’re going into battle! 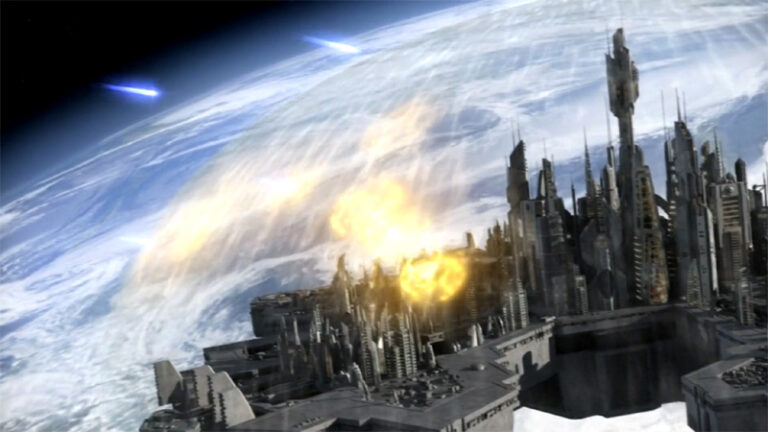 Earth is under threat from the Wraith, who have brought their super-charged hive ship all the way across the chasm between galaxies. Earth represents their salvation … because it is an unimaginably rich feeding ground, teeming with billions of humans. Earth throws everything it has at the enemy ship, including several advanced battle cruisers. But they can’t prevent the Wraith from reaching orbit.

Colonel Sheppard and a fleet of F-302 fighters engage Wraith Darts inside the atmosphere in a spectacular dogfight sequence. But they can’t hold off the enemy’s massive numbers. The Wraith finally destroy Earth’s ace in the hole, a weapons platform left behind by the Ancients.

As the Wraith move in to strike, there is just one thing between them and terra firma: Atlantis herself! Under Richard Woolsey’s command and piloted by Carson Beckett, the city-ship has used its wormhole drive to traverse the distance from the Pegasus Galaxy. Atlantis engages the Wraith hive in pitched battle, risking their lives and allowing the enemy to push them down into the atmosphere in order to keep firing. Meanwhile John Sheppard’s team sneaks on board the hive and detonates a nuke, and the enemy is defeated in a huge flash! 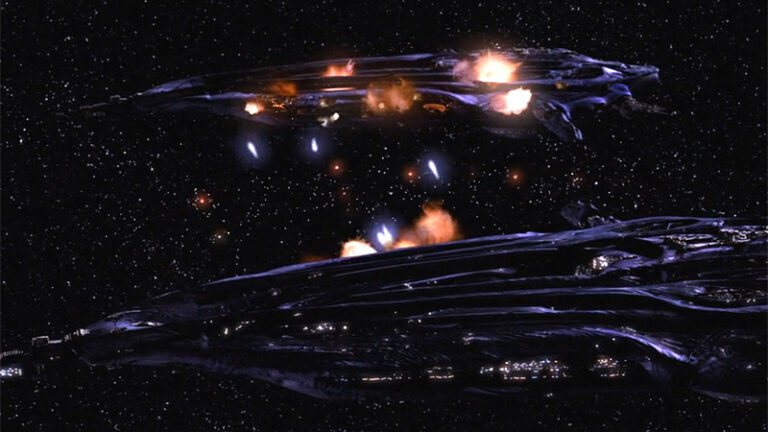 They use a tactic that has worked in the past, using their on-board Asgard transporter to try and beam nuclear warheads onto the enemy ships. But the Wraith now have countermeasures, so Daedalus lights up its battery of missiles and the ship’s rail guns. But it’s just not enough against two massive hives.

Never one to sit out a fight, Sheppard escapes and commandeers a Wraith Dart. He scoops up his friends with the culling beam, flies out of one hive, and begins an attack run on the other Wraith ship. Convinced that their allies have turned against them, the second ship opens fire with all it has, and in a matter of moments the two Wraith hives are firing at each other. There is a huge explosion, leaving only the Daedalus (and Sheppard’s Dart) intact. It’s a brilliant tactical turn, exploiting the Wraith’s factionalism and distrust of one another. 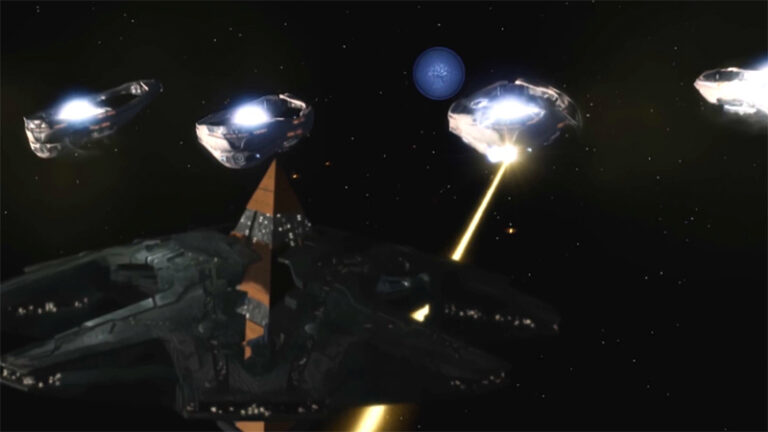 Earth and the rest of the Milky Way Galaxy have been warned for a year now that the “Day of Reckoning” is coming. The Priors, religious zealots who serve a race of evil ascended beings called the Ori, have told them that the forces of the Ori are coming. Now they have succeeded in building a Supergate, through which they can bring their powerful warships to convert the planets of our galaxy by force.

To stand against them, Earth launches its newest battle cruisers (the Odyssey and the Korolev) and rallies its allies to draw a line in the sand at the Supergate. Humans, Jaffa, Tok’ra, Asgard — even Lucian Alliance ships join the fleet! The Ori must be stopped from gaining a foothold in our galaxy.

But it’s not enough. Four massive Ori warships emerge through the event horizon, systematically obliterating the coalition ships with their powerful beam weapons. There are massive casualties, including the destruction of the Korolev. It is one of Stargate SG-1‘s coolest visual effects sequences — and it ends the season on a shocking note of defeat. 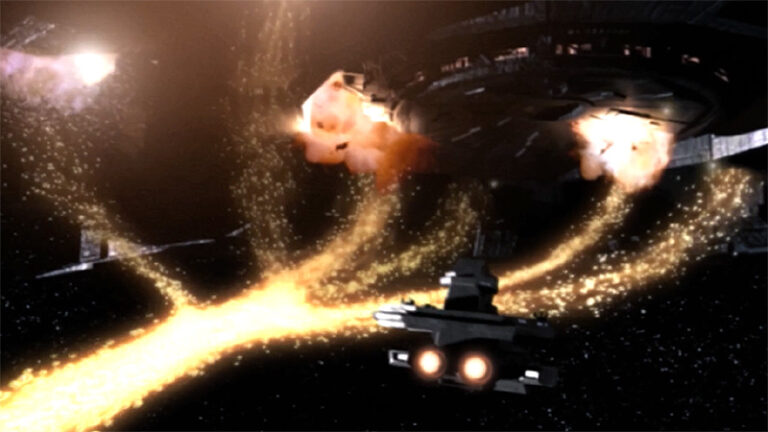 OK, we’re fudging things a little bit on this one — technically the battle over Antarctica takes place both in space and inside Earth’s atmosphere. But as one of SG-1‘s defining moments and easily a Top 5 visual effects sequence, it has to make our list. After quickly rising to become the most powerful Goa’uld System Lord and destroying or crippling SG-1’s allies, Anubis has turned his seemingly unstoppable fleet toward Earth itself.

He unleashes his forces on the planet, with death gliders and Al’kesh bombers engaging Earth’s F-302s and the Prometheus over the Antarctic ice cap. The clash made the show’s opening credits starting in Season Eight, cementing this battle as iconic.

The battle takes place over Antarctica because Anubis is targeting SG-1, who have arrived with Bra’tac on board a cargo ship in search of a weapon left by the Ancients. They drill into the ice and find a buried outpost, where Jack activates drone weapons while his team holds off Anubis’ super-soldiers. General Hammond on the Prometheus and Colonel Mitchell in his 302 (seen later, in “Avalon”) put their lives on the line to buy the team enough time, and the drones soar skyward into space. They rip through Anubis’s mothership again and again, destroying it! Earth is safe once again. 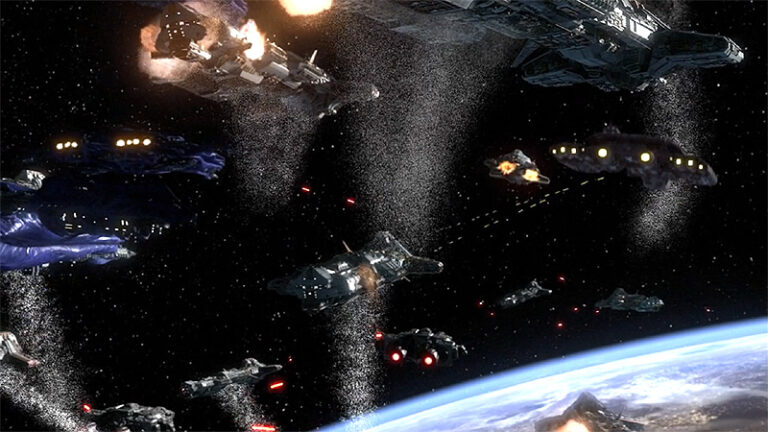 Number 1: “Be All My Sins Remember’d”

The war between the Replicators, the Wraith, and Atlantis comes to a head in this massive, all-out confrontation in orbit of Asuras, the Replicators’ home world in the Pegasus Galaxy. Atlantis has allied itself with Todd and the Wraith in an attempt to stop their super-advanced, common enemy.

Holding off the Replicator warships is one thing — and the battle seems to go well with the Daedalus, Apollo, the Wraith ships, plus help from the Travelers. But the Replicators represent an ongoing threat to the entire galaxy, having wiped out entire worlds in order to compromise the Wraith’s human food supply.

The team needs a better solution than just destroying the enemies’ ships. So Rodney McKay uses Ancient technology to create “Fran,” the “Friendly Replicator Android.” The seemingly innocent Replicator woman is programmed to infiltrate Asuras and destabilize their nanite cells. She becomes the core of a massive blob of nanites, which destroys the capital city as all nanites on the planet and on ships in orbit are irresistibly pulled toward it.

The mass is finally pulled down toward the planet’s core, destabilizing Asuras and causing the planet to explode.

The Replicator threat is over, for good. 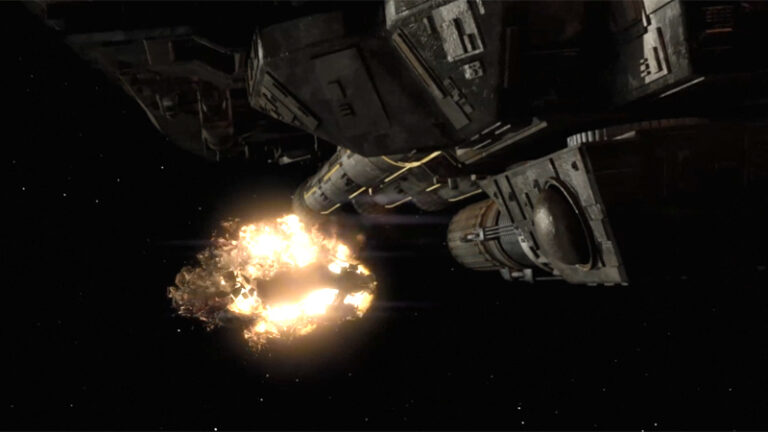 So where is Stargate Universe on our list? Over the course of its 40 episodes the show had fantastic visual effects work, including some intense and beautifully choreographed battles. We opted not to rank any of these higher than the episodes above chiefly for story reasons: when Destiny comes under fire the crew is usually trying to escape, either from the blue aliens or drone ships. It makes for great VFX and exciting sequences, but usually not a scene where our heroes are charging into battle.

Your mileage may vary, and we’d love to hear your favorite SGU space battles in the comments!

So, what did we leave out? Leave us your Top 5 ranked picks in the comments below! Got an idea for a future Top 5 list? Let us know what you want to see in a future installment of the Friday Five.

Next Up: Check out this recent list of our five favorite Jonas Quinn episodes from Stargate SG-1.

Missing my personal favorite, S8E16/17 Reckoning. The defeat of the Goa’uld and the replicators the first time.

Nick U
Reply to  Andrew

Yes SG-1 Reckoning season 8 should be on this list. Rebel Jaffa and Baals fleet to defeat the Replicators was spectacular. I would also consider the space battle in Atlantis s3 opener – No Man’s Land when Daedalus and the Orion engage 2 hive ships from getting to Earth.