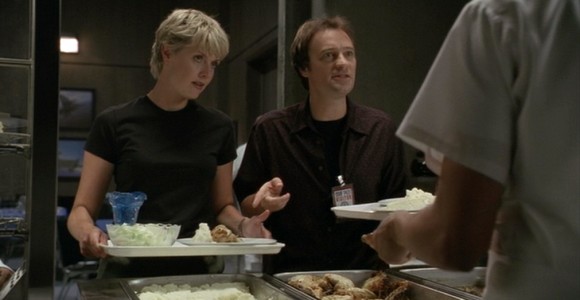 After an accident with the Stargate traps Teal'c in transit, SG-1 must turn to Russia – and to their enemies – for help before time runs out.

"48 Hours" is a complex episode, tying in the rescue of Teal'c -- trapped within the Stargate itself -- to several plot lines from previous episodes' story arcs. In this episode alone, the S.G.C. must confront: 1) Tanith; 2) another problem with the Stargate interfaced with S.G.C. technology; 3) the Russians, and the possible threat of a dominant Russian Stargate; 4) Colonel Frank Simmons; 5) Colonel Harry Maybourne; 6) the S.G.C.'s lack of a D.H.D.; and 7) the Goa'uld formerly known as Adrian Conrad.

The S.G.C. is also introduced to a possible new threat: Dr. McKay.

I've wondered what would happen if someone was trapped/lost in the wormhole since the first season's "Solitudes," when Daniel and Teal'c were discussing where O'Neill and Carter were:

Teal'c: "It is possible that they might have perished within the wormhole."

Daniel: "Yeah. In which case they're gone. I know, I thought of that."

(It's similar to when Star Trek's Dr. McCoy asked Spock ("The Gamesters of Triskelion"), "Can people live that long [an hour] as disassembled atoms in a transporter beam?" Star Trek fans didn't find out the answer until 24 years later, when in Star Trek: The Next Generation's "Relics", Scotty was rescued from a crashed ship after having survived 75 years as being disassembled atoms in a transporter buffer.)

As in "Red Sky," the S.G.C. learns more information here on how the Stargate works. With Teal'c trapped, and the S.G.C. unable to use their Stargate (as it would erase Teal'c's energy pattern), Daniel heads off to Russia (with Major Davis) to negotiate the return of S.G.C. teams that are off-world -- and eventually the loan of the Russian D.H.D. to the S.G.C.

That brings the immediate question to mind: what ever happened to the Antarctic D.H.D. the S.G.C. found in "Solitudes?" We saw it being used in Season Two's "Touchstone" by the rogue N.I.D. team -- has it been stolen or lost? It's a pretty significant plot point in the history of the show, but it goes unaddressed.

Meanwhile, Colonel Frank Simmons has turned up at the S.G.C. with Dr. McKay -- introducing him as the foremost expert on the Stargate. Carter is assigned to work with McKay to formulate a plan to reintegrate Teal'c. We learn that it's from Dr. McKay's input that the S.G.C. is only given 48 hours to rescue Teal'c; McKay believes it is the time frame before entropy would cause the crystals to lose Teal'c's energy pattern. It's somewhat obvious that McKay hadn't been brought in to provide assistance, but to hinder any progress.

Colonel Harry Maybourne is used in this episode to help Jack track down Adrian Conrad, as Conrad's Goa'uld may have information about the Stargate that will assist Teal'c. My question is this: What happened to both Adrian Conrad and Harry Maybourne after this episode? As Simmons was arrested, who has custody of Conrad now? Was Maybourne taken back into custody, or did he escape again? Both of these plot elements were left unaccounted for at the end of the episode. Hopefully, we'll see a resolution to these two plot elements in episodes yet to come.

Daniel, Major Davis and the Russian Colonel return to the S.G.C. with the Russian D.H.D. To obtain the loan of the D.H.D., the Russians have apparently forced an agreement that a Russian team be assigned to the S.G.C. in the future, and that information be shared regarding naquadah generator technology. The D.H.D. is needed to created an event horizon without the wormhole vortex, so that Teal'c's energy signature can be reassembled.

Fortunately, the Russian D.H.D. works. Unfortunately, it's heavily damaged in the process. As the Russian Stargate now doesn't have a D.H.D. to operate, that leaves the S.G.C. with the dominant Stargate.

When Teal'c does materialize, he advises the team that Tanith has been eliminated. It seems a shame that Tanith was dealt with so summarily, but apparently the actor, Peter Wingfield, was unavailable for the episode.

"48 Hours" is a well-paced episode, and very entertaining, with some spectacular photography by director Peter F. Woeste. Take another look at the scene with Carter and O'Neill in the control room. As the camera moves across the glass of the control room, we can see the reflection of the Stargate superimposed over the galactic map in the Control Room. It's quite striking.