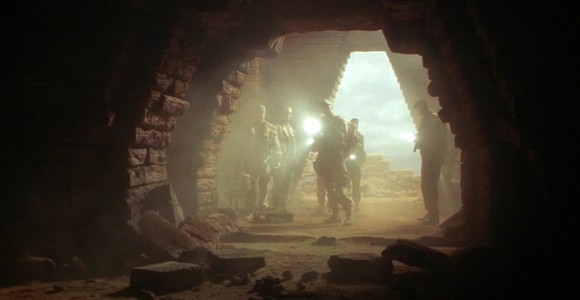 SG-1 teams with a Russian unit when one of their Stargate teams goes missing in a mysterious alien ziggurat.

On a distant planet, SG-1 is bored. The team waits outside an ancient ziggurat – a 4,000-year-old Babylon temple – while Dr. Daniel Jackson attempts to decipher a way to unlock the door. Major Samantha Carter, meanwhile, makes an unsettling discovery: an empty pack of Russian cigarettes.

Back on Earth, General Hammond briefs the team. He has learned that one Russian team went through the gate just a few days before it was shut down ("Watergate"), never to return. The team's leader was taking orders from a faction of the Russian government similar to the U.S.'s N.I.D. – interested in acquiring advanced alien technology at just about any cost.

SG-1 has found the planet they gated to, and are forced to team up with a Russian unit to find the missing men. The Russians have been pressuring the U.S. for more involvement in the S.G.C. since learning of its existence last year, and especially since a disaster forced them to give up their Stargate.

Jack O'Neill clashes with Russian Colonel Zukhov, though the two are more alike than they might admit. Together with the three man and one woman Russian team, SG-1 returns to the planet. Daniel has deciphered the door mechanism, and manages to open it. The eight of them proceed into the dark, unlit and unstable ancient tomb, winding through narrow passageways as they explore the structure.

O'Neill orders them to hold their position until he arrives, but Zukhov approaches the sarcophagus and attempts to open it. He triggers a booby trap, sealing the door to the outside and locking both teams inside. One of the Russian officers tries to escape, and is crushed by the massive door.

Major Carter and Lieutenant Tolinev go looking for signs of the creature, while Daniel works at translating more of the Babylonian inscriptions in the sarcophagus chamber (with Major Vallarin as his bodyguard). Teal'c and Colonel Zukhov go in search of the remaining missing soldiers.

They find them – also eat by the creature, leaving only their skeletons, uniforms and a few personal items. Colonel Zukhov rummages around in the dead soldier's bag when Teal'c looks away, and finds an ornate alien artifact – the legendary Eye of Tiamat, which was said to give Marduk magical powers.

Carter and Tolinev find the creature – or rather, it finds them. It attacks the Russian soldier, leaving her with a venom-filled bite. Carter drives it away, injuring it with her weapon. But it's no ordinary animal, she reports: she sensed the presence of a Goa'uld symbiote.

Marduk is not dead. Rather than being eaten alive inside the sarcophagus, he entered the creature and possessed it, surviving in the sarcophagus until the Russian team let him out.

Tolinev is near death, and there's nothing the team can do for her here. They have to find a way out of the tomb and back to Earth. Faced with no other options, Colonel Zukhov advocates using explosives to try and break through the door. O'Neill refuses, as it would probably cause the entire structure to come down on top of them. They'll keep exploring.

Sam and Teal'c go looking for the creature again, and find it – dead. But the symbiote is not inside it. Presumably, Marduk was unable to heal its injuries and sought out a new host.

O'Neill and Zukhov suspect one another, naturally, and reach a stand-still – their weapons trained on one another. But when Vallarin arrives, he reveals that he is now host to Marduk. Using a Goa'uld hand device hidden in the ziggurat, he blasts the two soldiers to the ground. He knows that the Russian team had secret orders to recover alien technology, and believes that Zukhov has the Eye of Tiamat.

O'Neill orders him not to hand it over, despite the fact that Marduk has a P-90 trained on him. But Zukhov relents, and agrees turns over the Eye – but tosses Marduk a live grenade instead.

The room caves in on Marduk and Zukhov, burying them under a ton of rock as O'Neill escapes. He returns to the main chamber, and learns that Daniel has found a ring transporter in the room that will allow them to escape.

Marduk survived for 4,000 years in the body of an alien creature, though, and is not about to be stopped by a pile of rubble. Badly injured, he stumbles into the chamber and promises revenge on SG-1. But as the team transports away, Marduk sees what they have left behind for him: a pile of explosives detonate, filling the room with a fireball and killing Marduk.

Back on Earth, Lieutenant Tolinev is saved – though the Russian general accuses O'Neill of treating the Russian officers as expendable. O'Neill makes sure that the Russian's secret orders are on the record, since they put both teams in jeopardy, and tells the general not to expect future involvement with the S.G.C.