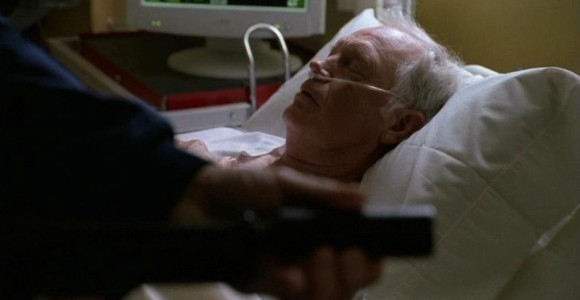 Colonel O'Neill is charged with the murder of Senator Kinsey, and the rest of the team must uncover a conspiracy in order to clear his name.

Senator Kinsey exits an office building amidst a crowd of cheering spectators, and the entourage of security expected for a presidential candidate. His party's convention is only weeks away, and Kinsey is regarded by many to be a top contender for the second spot on the presidential ticket. Kinsey has been hostile to the Stargate program, and his star – and his power – is on the rise.

But his plans may soon come to a bitter end: in a window several floors up in the hotel across the street, a lone gunman loads his weapon. A shot rings out, striking the Senator square in the chest. He goes down, and the shooter packs up his weapon and makes a quick exit. It is Jack O'Neill.

The next morning, Colonel O'Neill arrives at the S.G.C. to find his team crowded around a television, listening to the latest reports. Jack has been on vacation alone in Minnesota for several days, and he appears shocked when Major Carter tells him that Kinsey is dead. But General Hammond soon arrives with a pair of military guards, who arrest O'Neill for the murder – despite his vehement protests.

Major Davis soon arrives to explain the matter to SG-1. Police recovered surveillance video of O'Neill from the hotel, seemingly incontrovertible evidence against the colonel. But the team can't believe he would do this, and Hammond orders them to investigate the matter – bearing in mind that they have little jurisdiction, if any. Knowing that O'Neill once blackmailed Kinsey based on his involvement with a rogue faction of the N.I.D. ("Chain Reaction"), SG-1 considers just how Jack may have been impersonated by someone who knew there was bad blood between them.

Carter visits Area 51, where 12 mimic devices recovered from aliens who once infiltrated the S.G.C. posing as base personnel ("Foothold") are stored. They're fakes; the real mimic devices – including one programmed for O'Neill's image – have been stolen. Jonas and Teal'c investigate the matter further, while Carter flies to Washington, D.C. to check in with an old acquaintance.

She meets N.I.D. Agent Malcolm Barrett at the organization's headquarters. He gives her no help whatsoever – but, cryptically, passes her a handwritten note telling her to meet him in a nearby park. When she arrives, Barrett tells her that his office is bugged (part of standard N.I.D. operating procedure). There is a cancer in the N.I.D., he tells her – and after the hijacking of the Prometheus ("Prometheus") by Frank Simmons and a former N.I.D. team, the White House has had enough. They called Barrett in and assigned him to a secret mission to bring down this shadow group that is using the N.I.D. to do its dirty work. He was close to getting enough information from Kinsey to take down the group when the Senator was shot.

The two visit a known weapons dealer, whom Barrett allows to operate in exchange for information. They learn that the shooter did indeed purchase his weapon there – but the dealer identifies him as Colonel O'Neill. Carter asks if the buyer handled any other weapons – which he did. A fingerprint from the weapon leads to a positive match in the N.I.D. employee database: an agent named Mark Devlin.

Meanwhile, Teal'c and Jonas have discovered that most of the Area 51 personnel who were studying the mimic devices were transferred to the X-303 project. Only a few continued to work on the devices, including one who was reportedly killed in a car accident just days before Kinsey's assassination. With help from Dr. Fraiser Fraiser, they determine that Dr. Brent Langham was not, in fact, killed.

They track him down, only to find that he is using one of the stolen devices to hide out behind another man's face. Teal'c and Jonas apprehend him, and take him back to the S.G.C. – where an intimidating Teal'c gets him to confess everything. He stole the devices for "The Committee," the shadow group that leads the rogue arm of the N.I.D. They're wealthy businessmen, he explains, who have millions invested and expect to reap billions in return. They use the N.I.D.'s resources to acquire alien technologies, then incorporate them into their product lines. "I thought this was about saving the world," Jonas observes. Langham tells him that no one ever said that had to be a non-profit endeavor.

Carter and Barrett track down Agent Devlin, only to narrowly escape the house he has rigged to explode. Soon, they realize that they have to start trusting each other. Sam tells him about the mimic devices and the foothold incident, which had been expunged from all official records; and Barrett tells her that Senator Kinsey is not dead. He's in a coma, and the story of his death is being reported to protect him from the shadow group. Major Davis is handling the whole thing.

Sam remembers, though, that one of the alien mimic devices was programmed to make the wearer look like Davis. They hurry to the hospital, and apprehend Devlin – who is indeed using the device to pose as Major Davis – just before he finishes off the Senator.

Carter then uses a mimic device – programmed to look like Devlin – to go and report to the Committee. She tells them that Kinsey is dead and Davis will get the blame. Next, they suggest, they should put pressure on General Hammond once again to relinquish control of the S.G.C. Carter gets just enough incriminating evidence from the businessmen before her mimic device fails, and Barrett rushes in with a team to arrest the men. The rogue N.I.D. is no more.

Back at the hospital, Colonel O'Neill appears in full dress uniform to reluctantly participate in an announcement to the press. Senator Kinsey has fully recovered, and tells the gathered crowd that O'Neill's apparent guilt was only part of Kinsey's own elaborate plan to bring down a rogue faction within the U.S. government. As Jack reluctantly shakes his hand, Kinsey whispers to him, "You just won me the election."