Book 5 in the Legacy Series
Summary 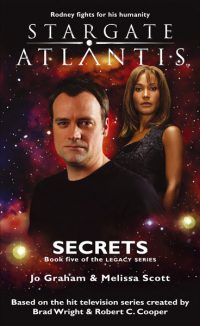 As the repercussions of Rodney’s abduction shake Atlantis, we find out more about the origins of the Wraith and the future of Pegasus.

Old secrets, new truths ... It is the aftermath of battle. Scattered and struggling to regroup, Colonel Sheppard's team face their darkest days yet in the war against the Wraith Queen, Death. Continuing her perilous masquerade as Queen Steelflower, Teyla Emmagan's friendship with Guide grows stronger. With his help she must journey into the Wraith's distant past to uncover the shocking truth about their origin -- and the key to Queen Death's defeat. Meanwhile, Rodney McKay has a different battle to fight as he struggles to regain his humanity in the face of the atrocity the Wraith have committed against him. With his life hanging in the balance, will Rodney be forced to do the unthinkable in order to survive ...? From Fandemonium