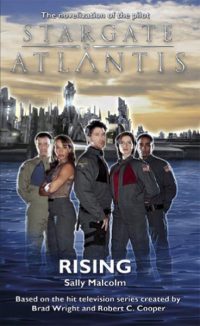 A new team embarks to the lost city of the Ancients in a distant galaxy, but also finds a terrifying new threat. "Rising" presents the novelization of the Stargate Atlantis pilot movie.

Atlantis will rise again ... Following the discovery of an Ancient outpost buried deep in the Antarctic ice sheet, Stargate Command sends a new team of explorers through the Stargate to the distant Pegasus galaxy. Emerging in an abandoned Ancient city, the team quickly confirms that they have found the Lost City of Atlantis. But, submerged beneath the sea on an alien planet, the city is in danger of catastrophic flooding unless it is raised to the surface. Things go from bad to worse when the team must confront a new enemy known as the Wraith who are bent on destroying Atlantis. Stargate Atlantis is the exciting new spin-off of the hit TV show, Stargate SG-1. Based on the script of the pilot episode, "Rising" is a must-read for all fans and includes deleted scenes and dialog not seen on TV -- with photos from the pilot episode. From Fandemonium