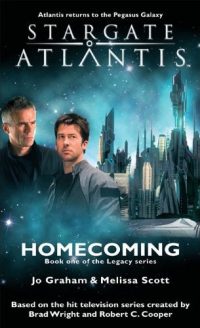 Atlantis returns to the Pegasus Galaxy from Earth, only to find that a powerful Queen is on the verge of uniting the Wraith factions.

Atlantis has returned to Earth. The team members have dispersed and are beginning new lives far from the dangers of the Pegasus galaxy. They think the adventure is over. They're wrong. With the help of General Jack O’Neill, Atlantis rises once more — and the former members of the expedition must decide whether to return with her to Pegasus or to remain safely on Earth in the new lives they enjoy ... Picking up where the show's final season ended, STARGATE ATLANTIS: Homecoming is the first in the exciting new STARGATE ATLANTIS Legacy series. These all new adventures take the Atlantis team back to the Pegasus galaxy where a terrible new enemy has emerged, an enemy that threatens their lives, their friendships — and the future of Earth itself. From Fandemonium The first of a six book series set after the end of Stargate Atlantis' final season, Homecoming sees Atlantis return to the Pegasus Galaxy. But the situation in Pegasus has changed. The Wraith are on the verge of unification under the new and powerful Queen Death. She stages a daring raid with one goal: the capture of the only man able to give their ships hyperdrive and lead them to Earth -- Dr. Rodney McKay. "Stargate Atlantis: Legacy" is an exciting new book series from Fandemonium Books coming in 2010. As the fantastically successful "New Jedi Order Series" did for Star Wars, "Legacy" takes Stargate Atlantis fans on to uncharted new ground, exploring what happens next after the end of Season Five. With no reset to zero, the jeopardy for our favorite characters has never been greater as they face entirely new challenges and dangers, as well as old foes revitalized. Sheppard, McKay, Teyla, Ronon and the rest must face Wraith, Genii, and their most dangerous foes yet in a galaxy-spanning adventure to uncover the true legacy of the Ancients -- a battle from which all may not return. From Amazon.com