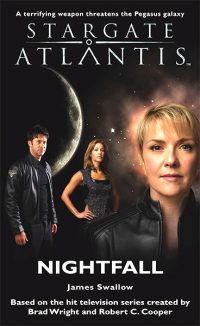 The Atlantis team discovers a planet protected from the Wraith by a mysterious guardian, which conceals a threat to the entire galaxy.

The rock of Aegis ... Deception and lies abound on the peaceful planet of Heruun, protected from the Wraith for generations by their mysterious guardian -- the Aegis. But with the planet falling victim to an incurable wasting sickness, and two of Colonel Sheppard's team going missing, the secrets of the Aegis must be revealed. The shocking truth threatens to tear Herunn society apart, bringing down upon them the scourge of the Wraith. Yet even with a Hive ship poised to attack there is much more at stake than the fate of one small planet. For the Aegis conceals a threat so catastrophic that the Atlantis team must risk everything to eliminate it from the Pegasus Galaxy ... From Fandemonium