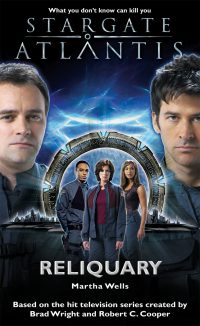 Major Sheppard and Dr. McKay find a gate address to a world that may be part of an Ancient repository – or a deadly trap.

Knowledge is power ... While exploring the unused sections of the Ancient city of Atlantis, Major John Sheppard and Dr. Rodney McKay stumble on a recording device that reveals a mysterious new Stargate address. Believing that the address may lead them to a vast repository of Ancient knowledge, the team embarks on a mission to this uncharted world. There they discover a ruined city, full of whispered secrets and dark shadows. As tempers fray and trust breaks down, the team uncovers the truth at the heart of the city. A truth that spells their destruction. With half their people compromised, it falls to Major John Sheppard and Dr. Rodney McKay to risk everything in a deadly game of bluff with the enemy. To fail would mean the fall of Atlantis itself -- and, for Sheppard, the annihilation of his very humanity ... From Fandemonium