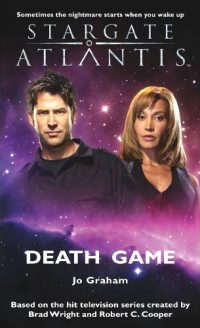 Sheppard and his team are stranded and separated on an alien world, and John and Teyla are taken by the natives as tribute to a Wraith overlord.

Colonel John Sheppard knows it's going to be a bad day when he wakes up in a downed Jumper with a head wound and no memory of how he got there. Things don't get any better. Concussed, far from the Stargate, and with his only remaining team mate, Teyla, injured, Sheppard soon finds himself a prisoner of the local population. And as he gradually pieces the situation together he realises that his team is scattered across a tropical archipelago, unable to communicate with each other or return to the Stargate. And to make matters worse, there's a Wraith cruiser in the skies above ... Meanwhile, Ronon and Doctor Zelenka find themselves in an unlikely partnership as they seek a way off their island and back to the Stargate. And Doctor McKay? He just wants to get the Stargate working ... From Fandemonium