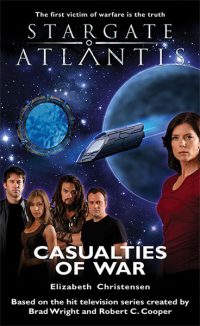 After two team members are lost on a mission, Colonel Sheppard submits his resignation. Dr. Weir negotiates with warring tribes who may be related to the Ancients.

Burden of command ... It's a dark time for Atlantis. Following the first Asuran clashes, Colonel Sheppard is buckling under the strain of command. When his team discovers Ancient technology which can defeat the Asuran menace, he is determined that Atlantis must possess it -- at all costs. But the involvement of Atlantis heightens local suspicions and brings two peoples to the point of war. Elizabeth Weir believes only her negotiating skills can hope to prevent the carnage, but when her diplomatic mission is attacked -- and two of Sheppard's team are lost -- both Weir and Sheppard must question their decisions. And their abilities to command. As the first shots are fired, the Atlantis team must find a way to end the conflict -- or live with the blood of innocents on their hands ... From Fandemonium