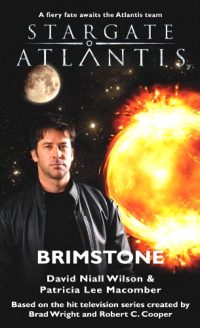 The Atlantis team finds a city of decadent Ancients on a moon on the verge of destruction, and must escape before this people's fate becomes their own.

Doctor Rodney McKay can't believe his eyes when he discovers a moon leaving planetary orbit for a collision course with its own sun. Keen to investigate, he finds something astonishing on the moon's surface -- an Ancient city, the mirror of Atlantis ... But the city is not as abandoned as he thinks and Colonel Sheppard's team soon encounter a strange sect of Ancients living beneath the surface, a sect devoted to decadence and debauchery, for whom novelty is the only entertainment. And in the team from Atlantis they find the ultimate novelty to enliven their bloody gladiatorial games ... Trapped on a world heading for destruction, the team must fight their way back to the Stargate or share the fate of the doomed city of Admah ... From Fandemonium