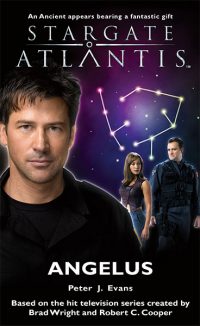 The Apollo is dispatched to the battlefront in the Wraith-Replicator War, where they encounter an Ancient vessel with a man who promises to help them end both threats forever.

Fear to tread ... With their core directive restored, the Asurans have begun to attack the Wraith on multiple fronts. Under the command of Colonel Ellis, the Apollo is dispatched to observe the battlefront, but Ellis's orders not to intervene are quickly breached when an Ancient ship drops out of hyperspace. Inside is Angelus, fleeing the destruction of a world he has spent millennia protecting from the Wraith. Charming and likable, Angelus quickly connects with each member of the Atlantis team in a unique way and, more than that, offers them a weapon that could put an end to their war with both the Wraith and the Asurans. But all is not what it seems, and even Angelus is unaware of his true nature -- a nature that threatens the very survival of Atlantis itself ... From Fandemonium