Book 3 in the Legacy Series
Summary 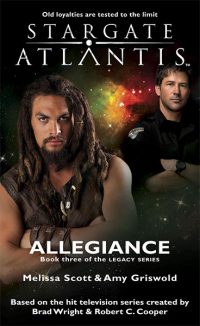 After Rodney is captured, Atlantis faces a new danger – their own man, turned against them.

Enemies and friends Reeling from the shocking discovery of Rodney McKay's fate, Colonel Sheppard and his team retreat to Atlantis to regroup. With Rodney not only in the hands of the Wraith, but apparently working for them, Atlantis faces a new danger -- their own man, turned against them. While Zelenka and Colonel Carter work frantically to crack the security protocols McKay embedded in Atlantis's computer system, Ronan revisits his past and finds much is changing on Sateda. Meanwhile, Queen Death prepares to make use of her most valuable prisoner; with Rodney still unaware of his true identity, the fate of Atlantis hangs in the balance ... Set after the TV series' exciting finale, Stargate Atlantis: Allegiance is book three of the gripping new Legacy series. From Fandemonium