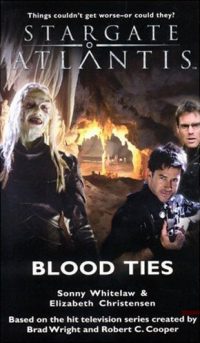 The Atlantis team returns home and teams up with SG-1 to track down a Wraith who has been sighted on Earth.

Creatures of the night ... When a series of gruesome murders are uncovered around the world, the trail leads back to the S.G.C. -- and far beyond ... Recalled to Stargate Command, Dr. Elizabeth Weir, Colonel John Sheppard, and Dr. Rodney McKay are shown shocking video footage -- a Wraith attack, taking place on Earth. While McKay, Teyla, and Ronon investigate the disturbing possibility that humans may harbor Wraith DNA, Colonel Sheppard is teamed with SG-1's Dr. Daniel Jackson. Together, they follow the murder­ers' trail from Colorado Springs to the war-torn streets of Iraq, and there, uncover a terrifying truth. As an ancient cult prepares to unleash its deadly plot against humankind, Sheppard's survival depends on his questioning of everything believed about the Wraith ... From Fandemonium