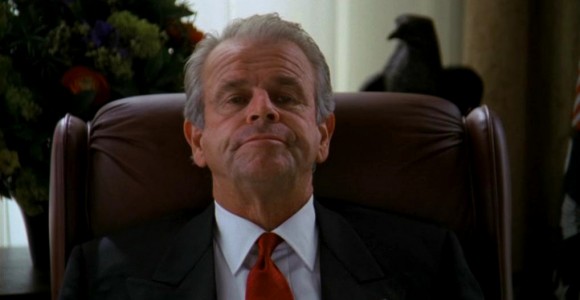 The newly-elected President is debriefed about the Stargate program, and Vice President Kinsey makes a new play for control of the program.

In the duration of a long-running television season, a clips show is something to be expected and endured. But as clips shows go, "Inauguration" is far above par, introducing interesting characters in a critical situation. Although the majority of the episode was a group of guys sitting around talking -- along with the occasional flashback -- it was still successful in summarizing important events from the past and perhaps foreshadowing what's to come.

In what could be called "Stargate does West Wing," we are introduced to the newly-elected President Henry Hayes ... and his conniving vice president, Robert Kinsey. Until this point it was assumed that Kinsey would be aiming exclusively for the Oval Office itself; his mention of a running mate in "Heroes" was carefully vague. But this new development reminds us that politics is a tricky game, even for someone as unscrupulous as Kinsey.

And, as we find out over the course of the episode, Kinsey may not be willing to simply sit around and wait for his turn in the spotlight. Even from Kinsey, a thinly-veiled allusion to assassination is a little surprising.

Hayes is initially bewildered by the revelation of the existence of the Stargate program, then curious, and henceforth begins a vetting of the S.G.C.'s foibles reminiscent of "Politics" and "Disclosure" (two of SG-1's previous clips shows). Kinsey and his lackey, N.I.D. agent Richard Woolsey, throw out examples of questionable practices and unprofessional behavior at the S.G.C. Kinsey even suggests that Carter and O'Neill might have an improper relationship. Now where in the world would he get that idea?

Hayes is sympathetic to what the people at the S.G.C. deal with day in and day out, but ultimately he has public perception to consider. Even with the Chief of Staff of the armed forces defending the S.G.C. and SG-1, Hayes is leaning towards agreeing with Kinsey and replacing the S.G.C.'s management. All might have been lost had Woolsey not miraculously developed a spine and a conscious -- which could be seen as awfully convenient, but also makes him a more interesting and multi-dimensional character. Woolsey goes to General Hammond, and Hammond offers up the disk that links Kinsey to the N.I.D.

The question still remains -- what will Hayes do with this new information? Can the President himself be trusted, and if so will he be as supportive of the S.G.C. as the previous administration? To what lengths will Kinsey go to see that his demands are met? And, considering his even more over-the-top-than-usual badness, should he be required to submit to an MRI scan?

With fine performances from William Devane, Robert Picardo, Ronny Cox and James McDaniel, this clips episode leaves us with more questions than answers, but at least it doesn't leave us bored.

When is Stargate SG-1 not Stargate SG-1? It's not such a trick question. With not one member of the team featured in "Inauguration" except during flashbacks, a viewer could be forgiven for wondering if they'd wandered onto the wrong channel by mistake.

But you know what? It didn't matter. Considering this episode was that dreaded beast -- the clip show -- what ended up on-screen was pretty damn good drama with a liberal sprinkling of plot.

My first reaction was to compare this episode to "Death Knell." Both had a large amount of guest characters. Both had very little SG-1. Both had something significant happening in the world of the S.G.C. So what was it about "Inauguration" that beat "Death Knell" hands down in its ability to keep my attention?

This is a great demonstration of how to create characters who will draw in the audience within minutes. President Hayes looked at first to be a little too lighthearted, but that aspect of his character is recognizable in good leaders who manage to keep everyone's eye on the ball while avoiding melodrama or panic. Hayes also had an air of confidence, giving the impression that he's right where he belongs, and that is a credit to the actor.

Two other characters who brought vibrancy to the proceedings were Kinsey and Woolsey. Kinsey, the man we love to hate, has clawed his way to the top through manipulations and lies. He wields his power with all the subtlety of a charging Mastadge, almost the Earth equivalent of Apophis or Anubis. His conviction that his mission is right, that he will win out, and that those in his way must be stamped underfoot is powerful. Kinsey is more than a little bit scary.

The impression given of Woolsey the last time we saw him was one of a Kinsey-in-training. He was confrontational and appeared to have made up his mind about the S.G.C. and its staff even before he spoke to any of them. And considering what we've seen of his past behavior, his claim to a lack of bias was a bit cheeky. But Woolsey isn't another Kinsey, which is what makes him fascinating. He's determined to get to the truth. He's determined to do his job. But he also bought into Kinsey's view of the world, and was perhaps rather more blinkered than you would hope an independent reviewer might be.

Why all the focus on these characters? Because they're what made this episode. Strong characters played by strong actors drew me in to what could so easily have been just another clip show -- something written to save a bit of the show's budget so it could be used elsewhere.

However, it's not all about the people. The overall story arc of the S.G.C. was moved forward considerably. Radical change was being discussed at a time when the Earth is on its own, her allies following their own paths. And, listening to Kinsey and Woolsey's recitation of the decisions made and their repercussions for SG-1, the S.G.C. and Earth, it's hard to dismiss them all out of hand. Yes, SG-1 have all been a bit looney-tunes from time to time. Yes, there have been mistakes made by all concerned. And yes, there has been insubordination and poor judgment. Again, the show is walking that line that says "Our characters are all fallible," and it's what makes those characters likeable.

There are flaws in "Inauguration" as well. I found it extremely odd that General Hammond wasn't in the Oval Office to give his side of the story, especially considering the range of subjects that were being covered. Asking questions that the reports have no answers to, and not allowing those involved to answer those questions, rather smacks of holding a trial without the defendant present. Hammond hadn't met Woolsey before "Heroes," yet we're told Woolsey had been conducting his investigation for months. I'm also stunned that one lone investigator was apparently assigned the job of reviewing an installation the size and breadth of the S.G.C.

While the episode did feel more like a set-up for "Lost City" than a story in its own right, the way the clips were knitted into the story was as unobtrusive as I've seen on Stargate, which can only be a good thing. However, miss "Inauguration" and the beginning of "Lost City" will just be one confusion after another. You have been warned.