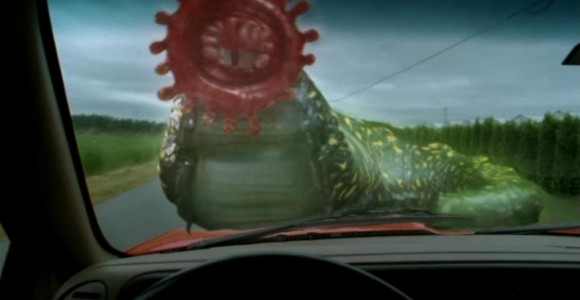 The team returns to Earth with a piece of technology that allows them to see alien creatures everywhere, and must attempt to contain the problem when it spreads beyond the base.

SG-1 returns home from another off-world mission, on which they recovered a piece of technology apparently created by the Ancients, as it bears markings of their language. Colonel Jack O'Neill thinks it looks like a big bug-zapper – and he may not be far off. Jonas Quinn sees a very large, translucent, flying insect in the gate room, which disappears through the wall.

General Hammond signals an alarm to lock down the base, but a sweep reveals nothing like Jonas described. Dr. Janet Fraiser checks him out, and can find nothing wrong with him – though Jonas continues to see alien insects throughout the base. Some suspect that his previous exposure to naquadria has had an effect on his mind ("Shadow Play").

Though apparently harmless, the bugs are causing a small panic at the S.G.C., as the ability to see them becomes pandemic. The most reasonable explanation is that the alien device is allowing everyone to see the creatures, so Major Samantha Carter and Jonas begin to study it. Carter theorizes that the insects didn't follow SG-1 back through the Stargate, but that they exist everywhere on Earth – in another dimension. The device simply allows anyone affected to see into it.

Reports of bug sightings surface in the nearby city of Colorado Springs, and the military arrives in force to quarantine the town. Their cover story is that a hazardous chemical spill is causing hallucinations – but some, including Gulf War veteran Vernon Sharpe (who runs the fuel station), don't buy it. When Vernon sees Colonel O'Neill and a group of soldiers arrive at his fuel station, he runs.

Back at the S.G.C., Sam and Jonas aren't having much success with the alien device. But they have discovered (by shutting it off) that the radiation it emits isn't the cause of their problem. After Jonas first touched the device and activated it, he passed on the ability to see the creatures through physical contact.

The device itself is crystal-based technology with no apparent buttons or controls, leading Sam to deduce that reordering the crystals themselves may be the only way to reverse its effects. After trying nearly all possible combinations, they finally stumble on the solution. They can no longer see the bugs, and only need to touch others to spread the cure.

A team is sent into the town to neutralize the effects, and Dr. Fraiser recommends that the general public be given a placebo pill to explain the cure. After having shaken hands with a "cured" person from the S.G.C., O'Neill takes a team in search of Vernon.

Sam and Jonas track down Vernon's grandmother and pay her a visit. They convince the eccentric woman to trust them, that they are just trying to help Vernon – though their cover story isn't the most believable. She tells them that he's probably on his way to see a friend. The tip leads O'Neill to a local airport, where they manage to get Vernon's flight to Las Vegas cancelled just before take-off. Vernon flees into an airport hanger, but Jack follows him and gets him to talk.

Vernon thinks the creatures are an alien invasion. Jack admits that they are aliens, but gives Vernon a half-truth. He convinces him to keep it quiet for the good of the country, and touches him – passing on the cure.