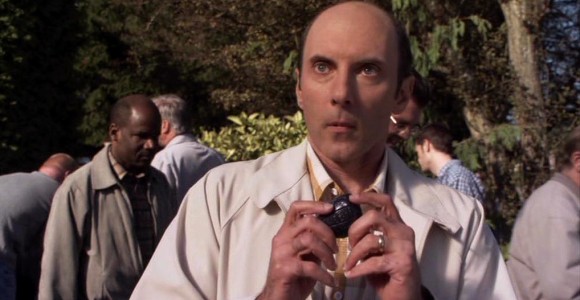 A barber from Indiana confronts Jack O'Neill, claiming that he has been seeing visions of SG-1's missions over the last seven years.

Sure, on the surface the logistical set-up for the episode's premise sounds a little contrived. But Joe doesn't simply represent garage sale-browsing Indianan barbers with Ancient genes. He represents the fans of Stargate.

Not the viewers, mind you -- the fans. There is an important difference. Viewers make up the vast majority of those who sit down on Friday nights to watch Stargate SG-1 -- hopefully sticking around for Atlantis -- and then go on with their lives. Fans, on the other hand, watch SG-1, Atlantis, and stick around for the repeats, go to conventions, write fiction, manipulate images, develop deep emotional connections to characters, write reviews about the episodes ...

Well, you get the idea.

"Citizen Joe's" premise is shaky when you look at it as a story in and of itself. It follows a married man and father through seven years of his life during which he is mentally connected to Jack, his personal and professional life suffering as a result. His wife leaves him. His son -- who undergoes a freakish growth spurt / recast halfway through -- seems disconnected. But it's hard to consider Joe a sympathetic character, because he's just so dang annoying.

At the same time, Joe holds up a mirror to the show's fandom. And it's a fun house mirror: a little distorted, a little twisty. However, ultimately everything that is supposed to be there is there.

Some folks find such mirrors amusing; they'll consider this episode droll social commentary with a dash of self-deprecating humor on the part of the creative staff. Others may find their reflection in the mirror unflattering. They will be more likely to take offense at the image of an individual obsessed with tales of Jack O'Neill and SG-1, sitting alone in the dark, pecking away at a computer, working on their "stories" ...

Even though it's not a totally unfamiliar scenario to some of us.

Joe's flashes of insight into Jack's escapades -- mentally composed when Jack was writing his mission reports -- are a creative way to turn the inevitable clips show into something more fun. It is also a timely detour from the abundant action and adventure of Season Eight, a more stylish companion to "Wormhole X-Treme!" -- note the cameo -- that has a field day with those who live vicariously through fictional characters that seem more real than the real people around them, who absorb the mythology of the show until it becomes a vital part of their lives, and shed tears over the loss of a character.

If you don't see yourself in some aspect of Joe's obsession, then you see a friend, an acquaintance, or a forum-mate.

There are drawbacks to this episode, of course. It doesn't further the show's overall story arc. It fails to address the consequences of Jack's having visions of an Indiana barber's Thursday night bowling league for seven years and not saying a word. There are factual errors: Indiana doesn't have a single Piggly Wiggly store. And the less said about Daniel's flashback hair, the better.

"Citizen Joe's" appeal for the typical viewer is dubious. However, for a fan who knows and lives the culture of the online Stargate universe, it's a fun house mirror: offensive or hysterical, depending which way you tilt your head.