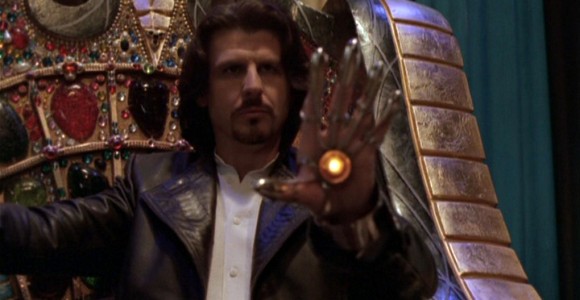 SG-1 must find a renegade Goa'uld who has been hiding on Earth for thousands of years.

Jacob Carter, Sam's father and Earth's liaison to the Tok'ra (the Goa'uld resistance movement with which Earth is now allied), arrives at the S.G.C. with some troubling news. The Tok'ra have come to believe that the evil Goa'uld Seth is on Earth. In fact, they think he's been hiding on Earth since the Stargate was buried in Egypt thousands of years ago.

Jacob is, in fact, doubtful that Seth can be located amongst Earth's 6 billion inhabitants. But Daniel and Teal'c point out that as a Goa'uld, Seth will never lose his thirst for power, and to be worshiped as a god. Jackson does some research, and manages to track the Cult of Seth throughout history in its various forms.

A search of the A.T.F. classified network turns up a sure lead: a cult of 50 followers under the control of Seth Fargough is currently under surveillance north of Seattle. Reports indicate that Seth has killed some followers in front of others, and that he can make his own eyes glow.

Sam learns that Selmak, her father's Tok'ra symbiote, requested this assignment because Jacob has an unresolved issue with his son, Mark. The two have been estranged for years, and Mark did not even come to see Jacob on his death bed ("The Tok'ra, Part 1"). But Jacob is a proud and stubborn man, and refuses to go and see his son.

Jacob and SG-1 fly to Washington to attempt to infiltrate the heavily armed and guarded compound and capture or eliminate Seth. They meet Jason Levinson, a father whose son is inside the compound for nine months as a follower of Seth, and James Hamner, in charge of the A.T.F. team that is watching the compound. Hamner tells SG-1 to leave, but a call from the president forces him to turn control of the operation over to Colonel O'Neill.

The team locates an entrance to underground tunnels leading into the compound, but must protect themselves before going in. Seth maintains absolute control over his followers withnish'ta, a biological compound used by the Goa'uld. The organism makes the victim's mind extremely "pliable," according to Jacob, though once a subject has been freed from its control with an electrical shock they cannot be reinfected.

O'Neill, Carter, and Jackson prepare to go in, and place small electrical devices in their ears. If infected, Teal'c and Jacob (who monitor from outside the compound, since Seth would be able to sense their Goa'uld symbiotes) can throw a switch and zap the team with a small jolt of electricity.

The team goes in, and is immediately apprehended by Seth. His followers bring them before him – and he is quite obviously the Goa'uld they are looking for. Not knowing who they are,Seth hits them with the nish'ta. They are under his control.

Soon after, though, Carter is brought to sit at Seth's feet – and the Goa'uld senses that she was once blended with a symbiote (the Tok'ra Jolinar ["In the Line of Duty"]). Still under Seth's control, Sam tells him that the Tok'ra sent them to find him.

Teal'c listens in, and activates the devices. SG-1 is shocked out of Seth's control, but pretend to still be followers. He knows they are lying, and condemns them all to death.

A follower leads them away, but they break free and shoot him with a zat gun. The electrical blast shakes the young man free of the nish'ta control. He is Tom Levinson, the son of the man outside. Tom leads the team to Seth's weapons locker, where they arm themselves with more zat guns.

The team walks through the compound, zatting followers free from Seth's nish'ta-induced control. Carter and Tom start evacuating them through the underground tunnels, while Jack and Daniel go after Seth.

They find him, but are struck down by his Goa'uld hand device. Seth places a Goa'uld bomb on the ground next to them, and flees to the tunnels – disguised in the same white robe worn by the followers. He hopes to escape unnoticed.

Jacob and Teal'c enter the tunnels from the other side, as Hamner and his men assist the fleeing followers. Armed with his own hand device, Jacob searches the hooded figures for Seth. Meanwhile, Jack and Daniel regain consciousness and escape the explosion.

Jacob and SG-1 collapse in on Seth, who continues to try and elude them in the crowded tunnel. But Jacob finds him and confronts him. Recognizing him as a Tok'ra, Seth blasts Jacob with his hand device. He will recover from the injuries, but Jacob gives his hand device to Sam.

With the ability to use Goa'uld technology but not to control it very well, Samantha heads toward Seth. She shoots him with the device, knocking him to the ground. Seth turns to shoot her, but another shot from Carter's hand blasts the Goa'uld into the hard ground, killing him.

A few days later, Sam and Jacob walk to the front door of a suburban home in San Diego. The aging father walks to the door and, uncomfortably, knocks. His son answers, and is unsure of how to react. But Jacob embraces him, and he and Sam are invited inside.