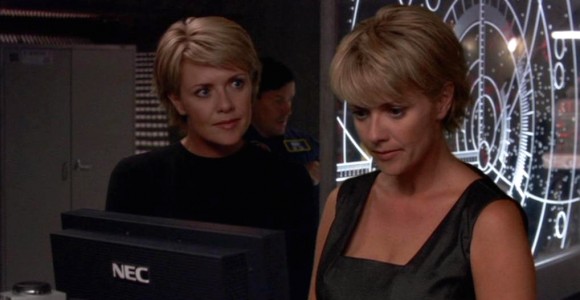 A duplicate of Colonel Carter seeks help from Stargate Command in defeating the Replicator Fifth, who she claims has found a way to counter the Asgard's new weapon.

It struck me as I watched "Gemini" that there must have been a scene cut from the beginning of the episode. The scene could have involved Lieutenant Colonel Sam Carter getting up in the morning, going to work, and accidentally leaving her "national treasure" brain in the jar by the bed. Or Sam being hit over the head the day before, leaving her with a concussion that would affect her judgment. Or ... something.

There had to be something. Anything. There's no possibility that Sam, one of the smartest people at the S.G.C., would allow a Replicator access to not only her mind, but also the Alpha Site's computer systems with all of their top secret information.

But she did. And, like so many viewers, I really don't get it.

Sam was tortured by Fifth not too long ago. She knows how unstable he is. She knows he's been crawling around inside her head and knows her well enough to be able to create a vision of her future that's realistic enough to confuse her. And she certainly knows how dangerous the Replicators are in general. Add to that the standard treatment of enemy defectors -- which was completely ignored in this situation -- and the mystery grows.

If we look to Jack, who ordered the Replicator to be destroyed, there is a completely different point of view. He has always maintained that Replicators are machines, and he is absolutely right. RepliCarter is not Sam. Fifth is not a misunderstood young man. They are extremely intelligent machines. They are machines who are capable of creating more of themselves, as well as more complex versions of themselves. They are certainly machines that are capable of switching themselves off.

The classic reverse psychology RepliCarter uses by asking to be killed, then giving more reasons for keeping herself alive while drawing Sam's sympathy and empathy, is quite clever. However, there are several times after RepliCarter's initial appearance where alarm bells should have been blaring. Yet Sam manages to talk around the problem with Jack, saying, "But what if ..." and playing on Jack's own fears of a powerful enemy. She allows herself to be a mouthpiece for RepliCarter without even realizing it.

And then there's Teal'c, who played the piggy-in-the-middle role. Jack trusted him to destroy RepliCarter. But Teal'c also claimed to understand Sam's emotions and reluctance. The trouble is, Teal'c is experienced enough to know better. He doesn't give Jack all of the information he needs to make a decision, not mentioning that RepliCarter had been inside Sam's brain. "We weren't in my mind, we were in hers," says Sam. Exactly how did Sam think she could see any of RepliCarter's thoughts as if in perfect video playback without there being some contact with her own mind?

Having let the "RepliCarter" into her head, Sam seems to fall for everything it tells her. Sure, Sam keeps saying it must be destroyed in the end ... eventually. But not until it's had access to the Alpha Site's computer systems, so that it can steal any knowledge it hasn't already taken from Sam's brain. Enemies like Linea ("Prisoners") are apparently a distant memory.

Of course, RepliCarter escapes. Earth now has no defense against the coming Replicator attack. And this is where things become a little clearer. Sadly, the things that become clear were related to behind-the-scenes needs, rather than character evolution. It seems that the writers had an aim in mind for this episode: it was to be the episode that led to the Replicators becoming a strong enemy once more, where Earth's disruptor weapon would be nullified. The enemy that had lost its bite is again a threat.

The trouble is that when a story is written to serve the needs of a plot characters tend to get lost or twisted along the way, and this is precisely what seems to have happened with "Gemini." While the intention of the writers was clear after a little thought -- Sam was meant to have made a perfectly human mistake, trusting her emotions -- there was no need to malign Sam's character to achieve those aims (nor Teal'c's, though to a far lesser extent).

Having said all that, I think Amanda Tapping did a sterling job. There were only a couple of times that she slipped from "RepliCarter" back into "Sam," and then it was only for seconds. It must have been a big challenge to play two characters that spent a considerable amount of time techno-babbling at one another, and that she carried it off so well does give me hope when looking to future RepliCarter episodes (which must surely now be coming).

The level of technical achievement was also high in the episode, and both were absolutely necessary if we were to believe there are two Sams.

At the end of it all, Sam admits she's at fault. And the audience breathes a collective sigh of relief. But we relaxed too quickly. Is she blaming herself for handing over vital information to an enemy? No, for hurting Fifth's feelings the first time she met him. Jack said that wasn't her fault, she wasn't the one who betrayed Fifth. And Jack was right -- it was his orders that led to them leaving Fifth behind. Of course, nobody owned up to the real issue; the elephant in the room was ignored. It was quite baffling.

Sam Carter used to be a smart, capable officer, while still holding on to her humanity. I don't know who was in this episode, but it wasn't the Sam I recognize. Whoever stole my Sam, can you please give her back?