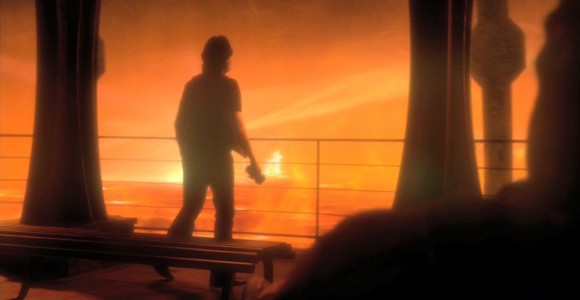 With the ship on a collision course, Young conducts a lottery to determine who will escape certain death and try and find a habitable planet with the shuttle.

Nearly out of power, Destiny has dropped out of F.T.L. and is flying directly toward a sun. The crew from Earth has no access to the core systems, and no way to change the ship's course.

Believing that the ship has brought them to this solar system because it has three possibly habitable planets, Colonel Everett Young intends to send the shuttle with supplies and seventeen people to whichever planet offers the best chance for their survival. He will select two of the shuttle's occupants, including the pilot. The remaining fifteen will be chosen by lottery. He assembles all 80-plus people in the gate room to announce the plan. When Adam Brody and Marine Sgt. Spencer voice their unhappiness, Young pointedly asks if anyone besides himself would like to take their name out of the lottery.

Dismissed until the shuttle is ready, Lt. Vanessa James looks at Eli Wallace, silently reminding him of his promise to share any information to which he is privy. Eli looks around for Chloe Armstrong, and spots her sharing a tender moment with Lt. Matthew Scott in the corridor. He's a bit pained by her having fallen for another man.

Chloe's tender moment with Scott becomes more intimate as she and Scott return to his quarters and make love. Certain he'll be picked for the shuttle because he is the only pilot besides Young himself, Scott suggests to Chloe that she will be chosen, too. Chloe is more realistic about her chances of making it off the ship.

As MSgt. Ronald Greer supervises the loading of supplies, Sgt. Spencer downs a prescription drug. Meanwhile, Camille Wray approaches Young in his makeshift office. She wants Young to choose all seventeen shuttle passengers himself. Annoyed with her intimation that she should be chosen, he threatens to withdraw her name from the lottery. Before she leaves Camille panics and pleads with him not to.

In his own room, Eli has fallen asleep, only to be awakened from a dream about his mother and his aimless life on Earth. Determined not to be forgotten, he grabs a kino. Building on the messages already recorded, he proposes leaving the kino floating in space as their monument to posterity. Young, Chloe, Wray and Greer add their statements.

Young finds Dr. Nicholas Rush in the shuttle, where he has been using the sensors to gather information on the three planets now coming within range. One is too hot; one is too cold. The third is behind the sun where it can't be scanned, but it will have to do as the others are certainly uninhabitable. Rush asks Young to take his name out of the lottery, as well – his destiny is with the Destiny. But he suggests that Young should rig the lottery so that those who can best contribute to the group's survival get to live. Young refuses the idea outright.

Everyone gathers in the gate room for the lottery. Colonel Young has selected Scott as pilot and Lt. Tamara Johansen for her medical knowledge; they are waiting in the shuttle already. Airman Becker, David Walters, Sgt. Riley, Dr. Boone, Dr. Park, Wray, James, and Brody are among those chosen in the random drawing. They each proceed immediately to the shuttle and settle themselves, some in shock and some weeping, knowing that their seat on the shuttle means that someone else will stay behind and die when the Destiny crashes into the star.

The lottery ends, and an angry Sgt. Spencer attempts to incite mutiny among those not selected. Greer knocks him out with a single punch. Passing Riley the kino, Eli and Chloe go to the Observation Deck with Young and Rush to watch the shuttle depart. The kino provides them with a spectacular view of Destiny from outside.

Knowing it won't be long until the ship is destroyed, Young and Greer take their leave. Rush apologizes to Eli for dragging him into all of this, but Eli does not regret anything. Chloe wants to know how they will die, so Rush explains, hinting that their remaining time is short. He departs to finish a "truly mediocre novel" before he dies. Chloe and Eli huddle quietly together on the Observation Deck, the girl he cares for leaning on him in their final minutes.

Proceeding toward his cabin, Young thanks Greer for his service. He's also glad Greer gave Colonel Telford what he deserved back on Icarus Base, a reference to why Greer was in detention when the base was attacked ("Air, Part 1"). Saluting the Colonel, Greer goes to his quarters. He undresses. Naked, he awaits the end. In his own quarters, Young removes his wedding ring and weeps.

Spencer, regaining consciousness, wanders around the ship. He finds one group playing cards, and another praying. Everyone is waiting for the end in the way that best suits them.

On the shuttle, Riley notes that the time has passed midnight – it's his birthday. Brody and Scott confer about the data they now have on the third planet, looming larger in the shuttle window. There is water and breathable air, but little vegetation. And the temperature is barely above zero. Survival will not come easily.

Destiny enters the sun's corona. Finishing his book and realizing how much time has passed, Rush races to the Control Room. The console makes him laugh with joy. He runs to the Observation Deck for visual confirmation. Never has he been so wrong; never has he been happier about that. Destiny will survive.

All over the ship, lights come on. The ship's shields protected them as Destiny recharged. Lowering a series of energy collectors beneath its wings, the ship drifts lower and lower until it enters the star itself. Colonel Young is eager to recall the shuttle, but must wait for Rush to gain access to the communication systems.

Meanwhile, Lt. Scott searches for a suitable landing site. Even as Johansen laments the fate of Destiny, they receive a call from the ship and Young orders them back. Everyone on board rejoices – but to his dismay, Scott cannot find a course that will allow them to rendezvous with the ship. Now recharged, Destiny is accelerating too quickly away from them.

Brainstorming, Rush decides that their only chance is to slingshot around the planet. The gravity boost should allow them to reach Destiny. Eli calculates an interception course. But even as the shuttle approaches Destiny, the ship's relative velocity is too great for docking. Firing the maneuvering rockets gives the shuttle just enough to allow Scott to land the shuttle with a jolt.

Amid the ensuing celebration in the mess hall, Rush's demeanor leads Young to wonder if Rush knew all along that Destiny could recharge herself. Too happy to care, the others urge Young to let it go.

They've survived another day. Right now, that's all that matters.