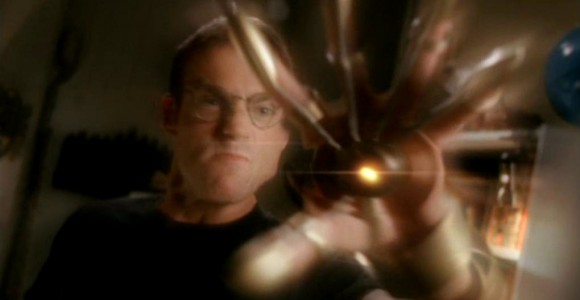 Jackson's teammates notice a disturbing change in him when he is reunited with the Harcesis child and given the Goa'uld genetic memory.

"Absolute Power" is another thought-provoking episode, providing us with lessons to be learned. But with a child as the teacher, riddles as the text, and a glimpse into a future that might have been where Michael Shanks spreads his wings to explore the bad side of Daniel for a change, I had fun in this class.

Since the idea of a Harcesis child was introduced in "Secrets," a great deal of hope has been placed in the baby born out of the union between the hosts of Apophis and Amonet (host to Daniel's lost wife). Said to possess the genetic memories of the Goa'uld, this child could easily transform the S.G.C. from underdog to victor in the ongoing war against the Goa'uld.

No one has ever questioned the S.G.C.'s need for that child's information, nor how such information might be put to use. Yet here, in "Absolute Power," we learn that the questions we fail to ask could have even more profound implications than the ones we are quick to consider.

The child, Shifu, comes to SG-1 via a side trip to Abydos, where Oma Desala, or "Mother Nature" -- the superior, even somewhat angelic being who has raised him -- sends him out of a whirlwind of dust. In addition to emphasizing the Mother Nature aspect of Oma Desala, this spectacular entrance also allows for some trademark SG-1 humor, with the whirlwind calling Daniel's name, and him replying, "This is Daniel. Who's calling?"

We soon learn that now inactive nanites are responsible for the child's quick growth; but even more important, we learn that the child's memories of the Goa'uld have been hidden from him.

This statement, combined with an earlier statement by Teal'c that "all Goa'uld are born evil," helps to explain why Oma has hidden Shifu's memories. Even Daniel understands that the boy would have the memories of "a thousand Hitlers." Nonetheless, if just one of those memories might be provided to the S.G.C., it alone might be enough to help mankind defeat the Goa'uld. Thus when Daniel's initial concern for the emotional well-being of the boy is countered by Sam's suggestion that since Shifu "forgot" the memories once, surely he can do so again, Daniel realizes that the importance of the information to humanity is worth what seems to be a minimal risk.

Despite his youth, Shifu proves much wiser than Daniel and the other members of the S.G.C. He knows the risk is far from minimal, but he is unable to get Daniel to understand. He explains that "if the instrument is broken, the music will be sour," perhaps implying that because the memories have been locked away, unlocking them will make them worse than they might have been originally; or perhaps that once they are unlocked, they will never be fully hidden again. Either way, releasing them is not wise.

However Daniel interpreted this riddle, his reply that "the music does not play the musician" offers what I'll call a more hopeful wisdom, suggesting that it is the person who would control the knowledge, rather than vice versa. Well, the title of this episode alone is enough to tell us Daniel's hopeful wisdom is far too simplistic. Shifu even says "normally there is truth in that." Aha! Normally, but not this time. Not when you're dealing with the memories of "a thousand Hitlers."

Michael Shanks did a wonderful job in "Absolute Power," first in his depiction of an honest, caring and hopeful Daniel bonding with the son of his lost wife, then in his obsessed, or perhaps even possessed "bad" Daniel proving the old adage that "absolute power corrupts absolutely."

When Shifu gives Daniel the knowledge he seeks, the evil of his subconscious defeats his conscious mind, thus "souring" his music, or who he is. He becomes obsessed with building the perfect defense against the Goa'uld, but remains oblivious to his taking on some of their characteristics. He ignores the implications of the half-memory, half-dream events that pit him against his former friends, such as those in which he expects Teal'c's subservience or wants to use a ribbon device on Jack. Nor is he concerned by the "red flags" associated with his refusal to involve the Tok'ra or the Russians, what could probably be considered typical Goa'uld System Lord behavior.

Daniel's subsequent awakening one year later left me feeling a little cheated. The drastic changes, none of which could easily be dismissed or forgotten about at a later time -- i.e. a mansion to rival the White House with aides and other various suit-clad employees (while Daniel is in pajamas) -- made it instantly clear to me that what I was seeing was a dream. Shifu, after all, had mentioned that dreams teach. There was also some discussion of the "dream" Sha're had given Daniel in "Forever In a Day."

It took a few moments for me to simply accept what I knew and watch to see what might happen next. Admittedly, I would have enjoyed the "one year later" scenes far more if I was not already alerted to their falsehood. Yet after I pushed beyond this disappointment, I enjoyed the glimpse into a future that might have been.

"Bad" Daniel was despicable indeed, sending Sam to jail and spying on her conversation with Jack, even making Teal'c "disappear" to a fate no one seemed aware of. Smugly superior, this Daniel would dress in only the best clothes, surround himself with only the best furniture, and dismiss his old friends without a second glance. Although he would claim it was all for the greater good of humanity -- that he was, in fact, single-handedly saving the world -- parallels with any of the System Lords we've been introduced to were abundantly evident. Pity he couldn't see them.

It was heart-rending yet fascinating to see what our Daniel could become, even to the point of anticipating Jack's climatic and futile attack. It was obvious that Jack agonized over that final decision to empty the contents of his gun into his former friend. It was equally obvious that Daniel had expected the attack; and should the scenario continue, this Daniel might very well have seen Jack tried and convicted for attempted murder without feeling any sense of sorrow at all.

Without "feeling." That would describe what had become of Daniel after receiving Shifu's memories.

When Daniel finally awakens from this hours-long (or perhaps days-long) dream, through which he seemed to have lived out a full year of experiences, he is as aware of what had occurred as I was upon watching. He had the same background from which to draw his conclusion as I had. Thus we don't see him waking "again." There is no need. He seeks out Shifu, and informs his teammates that they can never access Shifu's memories. The hope they had placed in the Harcesis child was misspent. They would have to find another way to defeat the Goa'uld.

And thus one of a multitude of loose threads left dangling from previous episodes has been neatly tied. We don't really know whether or not we'll see the Harcesis child again, but we do know that Daniel will not be determined to seek him out. Daniel has turned to a new path. He has shed a burden he could not take with him on the journey. All we can ask now is where will his new path lead him?