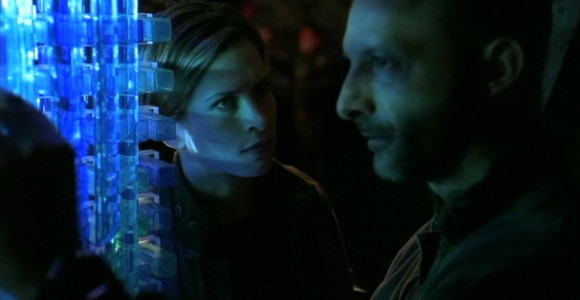 SG-1 must turn to a pair of convicted criminals to save a world from annihilation by the Goa'uld.

Do the end justify the means? Stargate SG-1 has explored this issue in episodes like "Touchstone" and "Shades of Grey," and returns to it in "The Sentinel." Also examined are the inherent underlying themes that began with "Stargate" the movie and have continued throughout the series: atonement and redemption.

In a fine bit of film editing, the characters of Colonel Shawn Grieves and Lieutenant Kershaw are placed into previous footage from "Shades of Grey" that is used in the introduction of this episode. In the arrest scene in the S.G.C. Gate Room, Grieves replaced Neumann and Kershaw replaced Tobias.

And the S.G.C. has a new weapon to add to its arsenal. From the Gate Room, the S.G.C. is now able to fire missiles through the Stargate that can be guided to their target with the use of a new U.A.V. guidance program that can "paint" the target for the missiles. That was a cool special effect, the missiles flying through the event horizon of the Latonan Stargate, stabilizing and acquiring their signals on the two Jaffa staff cannons.

Speaking of special effects, we again were treated to the special effect of watching someone emerge from the Stargate. I don't know how they do this effect, but every time I see it -- how the actor (in this case, Richard Dean Anderson) seems to "push" his way through the event horizon, and the resulting ripples in the event horizon ... it is awesome. It never gets old seeing it. (I get sort of a happy, tingly feeling.)

We are also re-introduced to Grogan (from this season's "Proving Ground"). Apparently, he did learn quite a bit from his training with Jack O'Neill and SG-1. Grogan is the only survivor of SG-9, and managed to survive for three days on Latona while Svarog's Jaffa hunted SG-9 down, killing Major Benton, and Tarkman and Winters.

"The Sentinel" is truly a team episode. Jack, for a change of pace, gets to tackle the diplomatic duties. I was quite surprised when Jack offered to evacuate as many people as possible and military support to get them to the Gate. Was this something discussed with Hammond prior to the mission, or something that Jack decided was the right thing to do once he had assessed the situation?

Daniel added a new level to his interpretive skills -- analyzing "the mathematical progression of the harmonics in each given pattern relative to its spectral equivalent" while assisting with the force field. And he saved the day with his last-minute interpretation of the symbols he recognized from P2A-463. Also, apparently Daniel has been hanging around Jack O'Neill too much -- I loved his line about "which end to the bullets go in again?" as he held up his KBar.

Sam and Teal'c are allowed to go into Warrior Protective Mode. There were two fine moments with interactions between these two characters. One, when Sam incorrectly presumed that the Jaffa were routinely on patrol. Teal'c immediately replied that the correct assessment was that the Jaffa had more than likely followed their tracks to their location. And there was no hint of reproach in his reply. Secondly, at the end of the episode, when Grieves advises that he can take down the force field, Sam looks to Teal'c for confirmation to allow Grieves to do so, which Teal'c gives with a silent nod of his head. Just two team members supporting each other.

Did Grieves know that in taking the place of the Caretaker in activating the Sentinel that his life would be forfeit? In effect, Grieves gained atonement for his previous deeds on Latona, and perhaps for the murder of the three natives on P3Y-294 (and the theft of the beam weapon) -- whether he knew it or not. And was it the actions of SG-1 -- O'Neill's order to Carter to blow up the Sentinel so that the Goa'uld couldn't have access to it -- that motivated his decision?

There were some slight continuity problems with this episode. In "Proving Ground," Grogan was a graduating member of the Air Force Academy, and therefore would graduate with the rank of 2nd Lieutenant. In the beginning of the episode, Grogan identifies himself over the radio to Hammond as Sergeant Grogan (and Hammond addresses him as a Sergeant). However, on Latona, O'Neill addresses Grogan as Lieutenant.

Also, actor Colin Lawrence, who has portrayed SG-3's Major Warren (as recently as "Menace"), was addressed as Major Lawrence in this episode.

On first viewing of this episode, I wasn't sure if the activation of the Sentinel also sent away Lord Svarog in orbit aboard his spaceship (the one with the really loud speakers). But on a repeat viewing, I noted Marul's line: "An enemy of our people came in a great ship, but it was sent away." So, apparently, the System Lords have lost another player. (Lord Svarog was in "Summit" and "Last Stand" -- he was never identified on camera, but he was the one dressed up like the Green Lantern.) Whether or not Svarog is dead, on the other side of the universe, or just whisked conveniently out of Latonan space remains to be seen.

"The Sentinel" provided a clear picture of what happens when you lose focus on the big picture. O'Neill, Jackson, Carter and Teal'c maintain their focus, strengthened by their fierce devotion to duty, honor and loyalty -- not only to the S.G.C., but to each other. They are a team.