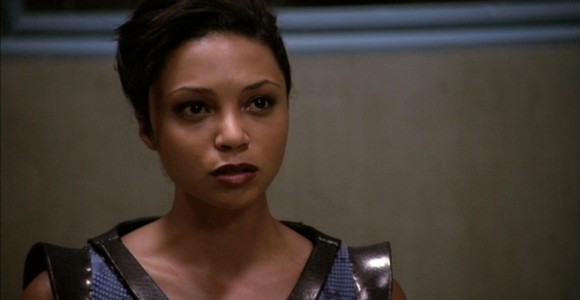 SG-1 encounters a young woman with the ability to control Replicators, and who may hold the key to the salvation of the Asgard.

SG-1 arrives on a desolate world, once the home of a technologically advanced race that was annihilated. Faint energy readings lead them to a structure, where they find an advanced android perfectly preserved – unharmed from the destruction that ravaged the world around her.

The team obtains permission to take the android – a beautiful young woman – back to the S.G.C. on Earth. Major Samantha Carter studies it, and approaches General Hammond after deciding that she can reactivate its power cells and turn it on. Hammond approves; they may be able to learn more about it, and what happened to its planet.

When the robot regains consciousness, she is frightened. SG-1 tells her that her planet was wiped out, and that they found her and brought her to Earth. She tells them that her name is Reese, and that she doesn't know what happened. A danger came to her planet, and her father told her to go to sleep.

Reese takes a liking to Daniel Jackson, who petitions Colonel Jack O'Neill for Reese's rights as a living being. She may even possess a human consciousness, transferred into a cybernetic body – as happened once with SG-1 themselves ("Tin Man"). Dr. Jackson talks with Reese about what she remembers, but doesn't learn much. Reese herself is impatient, and wants to see Earth and have fun. Although she was made in the image of a young woman, she has the maturity of a child.

O'Neill returns to the planet with another S.G. team to search for more clues, and comes up with a disturbing hint about the planet's fate: Replicator blocks. It's the first evidence of the presence of the robotic, insect-like creatures in our galaxy ("Nemesis".

The team wants answers, and decides that it's time to confront Reese about her true nature. She doesn't know that she's a machine, and Daniel tries to convince her that she is. She doesn't take the news well, refusing to believe Jackson – and throwing him across the room.

Jackson tries to talk to her again after a few stitches. She tells him that she's made something for him, so that they can have fun. It's a toy, she says – and a Replicator crawls out from behind a shelf and onto her arm.

Reese created the Replicators. The nanotechnology within her body can reorganize matter on a molecular level, turning an ordinary object – like a pair of scissors – into Replicator blocks.

The Replicator is quarantined, and the base is immediately sealed off. SG-1 tries to tell Reese that the Replicators have killed millions of people and have become a plague stretching across galaxies – but she doesn't believe them. They are just her toys. She believes that they hate her and, like the people of her world, think her father made her wrong.

It doesn't take long for Reese to escape custody, as she made enough blocks for more than just the one Replicator. Those continued to replicate, unbeknownst to the S.G.C., until hundreds of the mechanical spiders roamed the facility. Reese has the power to control them with her thoughts, and she feels pain when they are destroyed.

O'Neill and Hammond lead the fight against the invaders, who quickly take over the base computer system. Reese enters the Gate room, waiting for her Replicators to crack the computer system's code and dial the Stargate. Daniel goes in to talk to her, but refuses to open the Stargate for her.

Hammond and Carter set the base's auto-destruct system, and Daniel pleads with Reese not to let the same thing that happened on her planet happen on Earth.

He learns that, years ago, Reese taught her toys how to make more of themselves and how to protect themselves and her. The people of her world believed her father – her creator – had built her wrong, and wanted to destroy her. But soon, she lost control of the Replicators when they became too numerous. They wiped out her world and killed her father, and there was nothing she could do about it. Then, they left – and, alone, Reese went to sleep.

Daniel convinces her that he doesn't want to destroy her, and that he wants to be her friend. But when he tries to deactivate her, Reese catches him and twists his arm. As Colonel O'Neill burns through the door to the Gate room and the rest of the team continues to destroy Replicators, Daniel confronts her. "Your father made you wrong!" he shouts. He begs her not to let Earth be destroyed – to shut down the Replicators and herself before she loses control again. They may even find a way to fix her.

Before her answer comes, O'Neill bursts through the door and fires. Reese is filled with bullets, and goes down. She turns to look at Daniel, and the Replicators deactivate and fall to pieces. The self-destruct is deactivated, and so is Reese.

Daniel can't believe what Jack has done – possibly destroying their only chance to beat the Replicators and save the Asgard's entire galaxy. "You stupid son of a bitch," Daniel says to him.