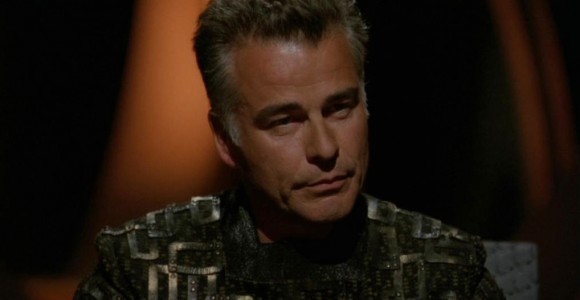 The team is called into battle unexpectedly when the Asgard homeworld is overrun by Replicators – which have evolved into a startling new form.

SG-1 encounters a very different kind of Replicator in "Unnatural Selection," the first new episode of 2003. But while their appearance, abilities and approach to the universe may have radically evolved, the motives of the "Replicator people" -- reproduction and conquest -- remain the same. The coolest villains since the Re'tu provide for an episode of Stargate SG-1 that fires on all thrusters ... once it finally gets going.

It is a slow start. The entire teaser is a mass of exposition, with everyone but Jonas sitting in a chair and talking. Then, they must return to Earth, pick up some supplies and have a conversation with General Hammond. Next, they must travel to the Asgard homeworld and think about what they're going to do (as well as debate over a name for the ship). Finally, they must land the ship and start their mission.

The episode is fully half over before the team meets one of the most interesting and dangerous foes they have ever encountered. What follows is pure gold -- terrific visuals, great acting on behalf of the guest stars, a flash from Jack's distant past, and the constant threat of being literally surrounded by Replicator blocks. The enemy appears hospitable at first (as one fan has observed, the most fearsome villains always invite you to dinner), despite the fact that SG-1 can seem to do nothing to harm them.

It's the why they are hospitable that makes for one of the series' most disturbing moments. The Replicators are thoughtfully planning their conquest of our galaxy by raping memories from the minds of SG-1, to see the worlds to which they have traveled. And this is the sole reason why they are still alive.

But an otherwise terrific episode would have ended much stronger had we spent more time getting to know the Replicator people -- and especially Fifth, with whom we are presumably suppose to sympathize when he is betrayed by our heroes -- and the grave threat they pose to all life. Explanations to Hammond, ice cream jokes, and strolling the decks of the Prometheus steal valuable screen time from the story's true heart and purpose.

Comparisons will be endlessly made between Stargate's Replicators and Star Trek's Borg (especially now that our favorite bugs have taken humanoid form). And in that contest, Stargate will ultimately triumph if these bad boys and girls get some more screen time. With "Unnatural Selection," the bugs are given a personality. They are no longer a mindless accident gone wrong -- a "virus" that is not inherently evil, but only programmed, as Jonas observes -- but sentient beings that have seen the alternative (in Reese and in Fifth) and decided to walk the path of evil.

It is a brilliant thematic stroke for the series. The Replicators may be temporarily trapped in a bubble while the Asgard puzzle and puzzle until their puzzlers are sore (at which point they'll doubtless come up with another bad idea), but don't count them out yet. They've matured into far too excellent a foe to dispose of in a giant, temporal closet.

The mindless automaton spiders have been made a far greater threat than ever before: the Replicator people are malevolent and uncaring, seeing themselves as the natural end of organic life in the universe -- superior to humankind. And that's where they beat out the Borg, who started as a driven, unstoppable force, and were gradually humanized -- until in Star Trek: Voyager they became little more than a manic gnat on the shoulder of a small starship.

And where The Next Generation's Picard chose not to use a sympathetic Borg to destroy its entire race (Hugh in "I, Borg"), O'Neill makes a decidedly different choice. He uses Fifth's humanity against the Replicators, trapping him with the rest of his kind. No Replicator, even a kind and fuzzy Replicator, can be allowed to escape the trap. The writer's characterizations are dead-on; we expect nothing less from Jack O'Neill. He is as confident in this decision as he was in shooting Reese dead.

And yet, this brings an unsettling new dimension to the pattern of O'Neill's rabid hatred for his enemies (be they Replicators or Goa'uld). His entire approach to the Replicators has been motivated by the need to exterminate. But what does O'Neill do when one of his vermin prey turns and expresses a desire to be good, and not evil? O'Neill cannot turn from his path; he would rather be guilty of killing one good creature than risk a galactic plague.

Where Picard would announce, "We mean you no harm, we have a Prime Directive," and Daniel Jackson would say, "We're peaceful explorers from the planet Earth," here Jack cannot consider anything other than, "We've been sent to kick your asses!"

Sam and Jonas fail (or rather do not have the opportunity) to be Jack's moral conscience, until after the deed is done. And Jonas's final evaluation of their betrayal of Fifth is as telling of his own character as it is of Jack's: he used Fifth's humanity against him. While Daniel would condemn Jack's decision (as he did in "Menace"), Jonas simply makes the observation -- not knowing what he himself would have done in the same situation. Though Jonas has a very small role in this episode, his character is quietly becoming very complex.

"Unnatural Selection" doesn't tie everything up with a neat little bow, but it does the job. It leaves us asking questions, debating the morality of the decision made, and seeing how messy life is. Despite its slow start, it's is not only a great episode of Stargate. It's the perfect next-step for the Replicators, who will no doubt return with a vengeance more terrible and fascinating than the mere assimilation of technology.