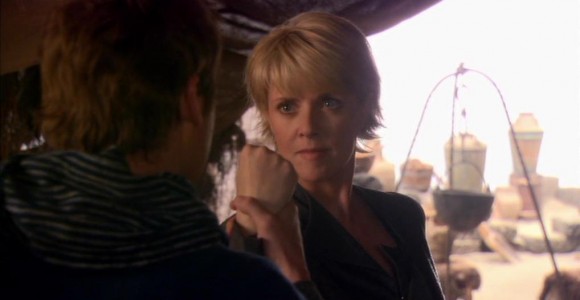 The fate of the galaxy hangs in the balance as Sam and Jacob search for the only weapon capable of stopping the Replicator onslaught. O'Neill leads a defense of the S.G.C., while Daniel squares off against Replicator Carter.

"Y'know, you blow up one sun and suddenly everyone expects you to walk on water!"
- Sam Carter

Even if you are not a spoiler fanatic, it's easy to see that the end of Stargate's eighth season will, in a way, be the end of an era. Change is in the winds, and that's not a spoiler -- it's an observation about SG-1's ambitious two-parter, "Reckoning."

In the life of every long-running series, every once in a while it is necessary to do a bit of house cleaning, brush the dust from some dangling plot threads and tie off a few of them. Stargate begins to accomplish this with these two episodes -- episodes which promise to develop into a much larger arc by season's end. By the end of these two 45-minute blocks a major character is assaulted -- and perhaps killed -- a large-scale invasion of the galaxy comes underway, the Jaffa conceive and execute an audacious plan to gain their long-sought freedom, and a more recent foe is destroyed permanently -- at least as permanently as is ever possible on this show.

I mentioned it was ambitious, right?

"Reckoning" gives us something that has been absent from Stargate SG-1 for a while, at least compared to sister series Atlantis: a sense of immediate peril and terrible urgency. The fast pace is compounded by the fact that the episode takes place on several fronts, through the development of many storylines.

Daniel and the fan-dubbed "RepliCarter" play mind games to uncover his repressed Ancient knowledge, games that come to a piercing conclusion -- if you'll pardon the pun. At last we're revisiting the questions that have plagued the character since before Season Seven's "Fallen": who or what kept Daniel from destroying Anubis in "Full Circle?" What happened during his time as an ascended being that he has not been permitted -- or has not permitted himself -- to remember, and why did he return to human form? (And, while we're at it, why did he have to return naked?)

Faced with a possible setback in their plans for freedom, Teal'c leads the attack on the psychological target Dakara -- which ends up being a much more crucial objective than anyone knew. Complicating the situation: Baal must either help Anubis destroy all life in the galaxy (including his own) or face the wrath of his creepy new overlord, while simultaneously waging an ineffectual battle against the Replicators.

As the Goa'uld-Replicator battle is monitored from the comfort of Stargate Command -- not one of the most thrilling sequences, but a fun opportunity to show off some computer-based visual effects -- the focus moves to hidden secrets of Dakara, which are brazenly uncovered sans archeologist.

Sam attempts to make up for some possible errors in judgments during the episode "Gemini," with the help of her father and -- eerily enough -- everybody's favorite sadistic torturer, Baal. While Jacob in particular finds collaboration with this self-proclaimed god to be the essence of abhorrence, Sam seems to take the adage "the enemy of my enemy is my friend" to heart.

Jack goes back into gung-ho flyboy mode for what could be one last of his last on-screen hurrahs, defending his planet from Replicators and rescuing wrench-wielding Sergeants from certain doom. Jack-as-General has been noticeably more toned-down and aloof than Jack-as-Colonel -- and the trend continues to the end of this episode, with an awkward moment and a thoughtful look. But it's always nice to see him back in his element, a bad-ass gun in hand, commanding the situation and blasting away at the bad guys.

These two episodes are crammed full of so much that the slower parts of the story -- Daniel's protracted mind-trip with Oma-turned-Replicarter, and Sam and Jacob's endless fiddling with the Ancient keyboard (last seen in "Window of Opportunity") -- are welcome reprieves.

Along with meaty roles for all four of our heroes, the two-parter is rich with guest talent: Bra'tac, Jacob Carter, Oma, Baal, Thor, Yu, and two creepy new incarnations of Anubis grace the screen. Questions are raised, alliances made and broken, self-aggrandizing Goa'uld are forced to ask for help ... and subsequently taunted.

The visual effects department has much to do with one of the most impressive scenes of Part 2, as the Stargate on Dakara dials every other gate in the galaxy at the same time. We see the beloved "kawoosh" again and again on planets familiar to the devoted viewer: Chulak, Hadante, the worlds from "Forever In a Day" and "One False Step." It's a creative way to tie all those planets together into this one moment, to in fact tie the many adventures and explorations of the past seven-plus years into this one, last-ditch chance for survival.

The events of "Reckoning" accomplish a great deal. The freedom of the Jaffa is all but assured; they were unable to capture Baal, but they did chase him off of his own ship. The Replicators have been expunged from our galaxy. But questions remain: will the legions of free Jaffa be able to work together without a common enemy to rally against? What will Teal'c's role be in this brave new Jaffa world? What are Baal and Anubis up to? What will come of the deadly weapon on Dakara?

And what about Daniel? The last time we saw him he was looking disturbingly glassy-eyed, but was that flash of white light at the last moment what we all suspect it is?

The list goes on and on. "Reckoning, Part 2" may not have ended with the "To Be Continued" tag traditional in such situations, but we can expect that this two-parter will expand into a larger arc. And we can hope that the final three episodes of the season will be just as impressive.