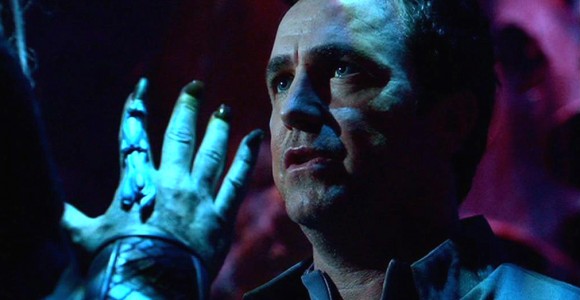 The Wraith arrive in a village where Dr. Beckett is working, and demand that the locals turn over a group of refugees who survived the Hoffan plague – or the entire village will be obliterated.

In a makeshift clinic in a small village, Dr. Carson Beckett and his assistant, Novo, are treating several people when Lt. Colonel John Sheppard, Teyla Emmagan, Ronon Dex and Rodney McKay arrive with medical supplies from Atlantis. Beckett is grateful, especially for the antibiotics as survivors of the Hoffan plague ("Poisoning the Well," "The Kindred, Part 1") have higher rates of infection. He introduces them to Novo, one such survivor from the planet Balar. She and others have been given a new home on this planet by these villagers.

A woman screams as nine Wraith walk into the village. They are met by Elson, the village leader. The Wraith commander demands that all the Balarans be turned over or when the hive ship arrives, it will destroy the village. This forces Beckett to tell Novo that not only are plague survivors immune to Wraith culling, they are fatally poisonous when the Wraith try to feed on them. The Wraith's food supply has been tainted, and as human populations realize this, no one will take in Hoffan plague survivors. They will be tracked down and killed by the Wraith.

Sefaris, another Balaran, arrives with news that the village council is discussing the Wraith's demand. Sheppard sends Ronon and Teyla to the Stargate to get help from Atlantis. John goes to the meeting, where he proposes moving the entire village of nearly 700 people – first to Atlantis, and then another homeworld. One villager, Jervis, finds this unacceptable. He wants to turn over the Balarans.

Before the plan can be implemented, Teyla and Ronon encounter more Wraith guarding the gate. While Sheppard devises another plan, Jervis leads a group of armed villagers in rounding up Balarans. Novo and Sefaris hide, but are soon captured. When Jervis comes for the sick, Beckett and Elson tell him they will not sanction the betrayal of the Balarans. Jervis reveals that some Balarans have already been turned over. While the remaining Balarans are hidden in a mine, Jervis and his men are placed in jail.

When the hive arrives, Sefaris offers Beckett in exchange for his own life. The Wraith reach the clinic as Beckett and McKay are packing supplies, and the two are taken prisoner. Sefaris is killed. Hearing Darts overhead, Sheppard heads for the clinic – but he is too late to save Beckett and McKay. Sheppard presumes that Jervis betrayed Beckett, but Jervis denies it.

McKay and Beckett regain consciousness in a cell on board the hive ship. Before they can escape, they are escorted to the lab where the Wraith commander's top scientist was working on an antidote to the Hoffan toxin. He died when he over-confidently tested his last version on himself. The Wraith commander insists Beckett continue the work ... or he will kill everyone on the planet.

Beckett studies the research. To his chagrin, McKay realizes that the consoles are freestanding and not tied into the hive's main computers. Before long Beckett stops, unwilling to do this work. He and McKay discuss the consequences – people will die no matter what Beckett does. But is there any other way out?

Soon Beckett stops working again. He won't tell McKay why, but he calls in the Wraith and demands to see the commander. Rodney fears for his friend's life as Carson is taken away. When he is brought before the commander Beckett refuses to continue the research, and the furious Wraith attacks and begins to feed on him. But then he stops, in horror: the doctor's blood contains the Hoffan toxin, and the Wraith commander dies a painful death. Grabbing his stunner, Beckett returns to the lab. He and McKay destroy the research by crushing the data crystals. When they finish, the pair search for an escape route.

They find a console tied into the main systems and, with Beckett standing guard, McKay radios Sheppard. Pleased that they are alive, Sheppard tells McKay to try and disable the ship's main weapons systems.

The Wraith discover their dead commander and come looking for McKay and Beckett. Once again, Beckett defends against the Wraith warriors as McKay disarms the ship. Finally, they flee to the Dart bay. With the two of them crammed into one Dart, McKay can't make it operational. As the Wraith try to open the sealed bay door, McKay figures out how he and Beckett can escape the Wraith and the hive.

In the time since McKay and Beckett were captured, Sheppard has devised another plan. Elson goes to the jail and, desperate to save their people, asks Jervis if the man can convince the Wraith to honor their original deal – the village's safety in exchange for the Balarans.

Now freed, Jervis and his men lead the Wraith to the mine where the Balarans are hiding. But they find that the cavern is empty. Only a block of C4 with a blinking detonator remains. Sheppard blows up the Wraith, along with Jervis and his mob. At the gate, Wraith guards are also attacked, allowing a first wave of villagers to reach Atlantis.

The hive launches its Darts. As they attack the Stargate area, Sheppard warns Teyla of an approaching culling beam. But instead of transporting her up, it deposits Beckett and McKay on the surface. The rest of the villagers escape through the gate, and Sheppard and his team follow.

Back in Atlantis, Beckett searches Jennifer Keller's research on the serum Michael created to keep Beckett alive ("The Kindred, Part 2"). He hopes to find a way to prevent infections in other Hoffan plague survivors, since he doesn't appear to be subject to them. McKay suggests they go to lunch. As Woolsey won't allow the data to leave Atlantis, Beckett would prefer to continue working because he's leaving when the rescued villagers go to their new home. Friendship wins out, however, and he sets aside the work to enjoy a few hours with his friend.