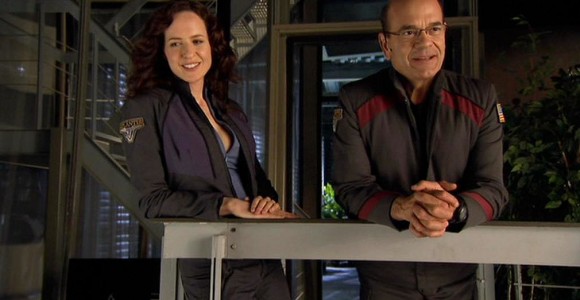 While being evaluated by the I.O.A. Richard Woolsey meets a beautiful scientist new to Atlantis, who is not what she appears. Sheppard is captured and tortured by an enemy he thought was dead.

Eating with Ronon Dex and Dr. Rodney McKay, Teyla Emmagan invites Richard Woolsey to join them. He opts to eat in his quarters as he's prepping for his upcoming performance review. Hands full, he attempts to hail a transporter. Dr. Vanessa Conrad, recently arrived in the city from Earth, drops him on the southeast pier, level 19, before continuing on herself. Richard is immediately attracted to the scientist and tries to play it cool.

Later, McKay is accosted by Radek Zelenka, back early from a ceremony on planet M2J. Zelenka wants to scan the ocean floor around the city, as he has noted anomalous temperature fluctuations. McKay dismisses the idea as a waste of time. Needing McKay's authorization, Zelenka finally persuades him to reconfigure Atlantis's short-range sensors. Within seconds, they locate something. The metallic, 4-foot-long cylinder is taken to McKay's lab where he and Zelenka begin studying it.

Meanwhile, I.O.A. representative Shen Xiaoyi beams into the gate room, having just arrived for Mr. Woolsey's first (and critical) performance review. Woolsey takes her on a tour of the city. After admitting that Woolsey has done an admirable job surviving his nine months in Atlantis, Shen congratulates him on a promotion – which will return him to Earth as chairman of the I.O.A.'s new environmental initiative.

Woolsey sees the job change as a slap in the face, a condemnation of his performance in Atlantis. When he reacts negatively, Shen elaborates. The I.O.A. believes his judgment is compromised. They want a change in the leadership of Atlantis.

Later, still struggling to understand his superiors' decision, Woolsey is in his quarters when Dr. Conrad stops by to invite him to the night's movie screening. He shares his bad news, and Vanessa points out that Shen wouldn't have made the three week trip if he were already fired. He may still be able to fight.

Encouraged by her insight, Woolsey confronts Shen about her true motives. He finds out that her real goal is to take Woolsey's job, and there is nothing he can do about it. She already has the right powerful people back on Earth in her corner. Richard retreats to a scenic Atlantis balcony to consider his next move, only to find Vanessa there. They are making dinner plans when Banks arrives to tell Woolsey that Dr. McKay needs him.

He and Zelenka have discovered that the device they recovered from the ocean floor contains the chemicals to biologically seed a new home world for an extinct, silicon-based race. It's also a repository of this dead civilization's history and knowledge. Acquiring this sort of advanced information is what the Atlantis expedition is meant to do. But while it's a veritable gold mine for them – and perhaps a way for Woolsey to impress his superiors – Rodney is also certain that extracting the data from the device will destroy it, and the hope of a people to recreate their civilization.

Needing to reschedule with Dr. Conrad, Woolsey asks Banks where her assigned quarters are located. Banks searches the computer and finds no reference to a Dr. Vanessa Conrad on Atlantis. Unnerved, Woolsey has himself checked by Dr. Keller. She finds nothing beyond sleep deprivation. Returning to his quarters, Woolsey finds Conrad there. Before she can explain fully, Shen arrives, demanding to know why Woolsey hasn't ordered McKay to harvest the data in the alien device. Conrad protests – but only Woolsey can see and hear her.

McKay realizes that he's seen the ultra-low frequency the device emits. It's similar to a device causing mass hallucinogen on M1B-129 ("Phantoms"). He hurries to Woolsey's quarters to tell him they must get rid of the device. With Shen, McKay and Conrad all talking at once, Woolsey ushers Shen and McKay out with the promise of a decision soon. He allows Conrad to explain herself.

Meanwhile, on the mainland with a botany team, Lt. Colonel John Sheppard has been captured by an old enemy. Acastus Kolya, the former Genii commander who Sheppard killed ("Irresponsible"), wants Sheppard's I.D.C. so he can destroy Atlantis by sending an explosive device through the Stargate. He beats Sheppard with his fists mercilessly. When Sheppard resists, Kolya has his men chop off his left hand so the Jumper (which requires John's Ancient gene to operate) can be used instead.

Later, John manages to free himself while Kolya and his men are elsewhere, and escapes. As he flees through the forest, though, he falls over the edge of a cliff. Sheppard manages to hang on, but with only one hand he can't climb back up. Kolya arrives and finds him there. He tells Sheppard that he never meant for this to happen – and John should use his left hand to pull himself up to safety. Sheppard pulls his arm out of his jacket, seeing that his missing hand is restored. He climbs back up the cliff side.

As Vanessa reveals the truth of her identity to Richard in Atlantis, Kolya does the same to Sheppard on the mainland. Both of them are manifestations of the alien device's artificial intelligence, which has the mission of making sure the Sekkari civilization is reborn. Fearing Sheppard, as the chief military man, the A.I. wanted to divert him while trying to ascertain what sort of people the Atlanteans were. Satisfied that Woolsey will listen now, Vanessa tells the story of the Sekkari.

After millions of years, they found they could not save themselves from extinction – so they dispatched over 50 of the capsules, hoping to recreate themselves. All of them failed. This particular capsule malfunctioned and the A.I. guided it to this world, where it has laid dormant for thousands of years. The Jumper exiting the underwater bay ("The Prodigal") alerted it to the presence of sentient life.

Kolya adds that the form of Sheppard's diversion was drawn entirely from his own mind. In truth, it is John who tortures himself every day.

Now the fate of the Sekkari rests with Mr. Woolsey. While he considers what to do with the capsule and its potential riches, Shen views a private communication transmitted from the I.O.A. back on Earth. They have chosen James Coolidge ("Midway") to replace Woolsey, instead of her. But as a reward for her excellent service, Shen will head the I.O.A.'s environmental initiative. Deeply angered, Shen writes a report praising Woolsey's work – thereby ensuring his appointment as permanent commander.

After Shen departs via the Stargate, Conrad acknowledges that the transmission she watched was a hallucination. McKay complains that he didn't get to see the A.I. Conrad assumes the true Sekkari form – a silvery, metallic, humanoid one – and shows herself to Rodney before the Apollo beams the device aboard for the final leg of its journey.

It isn't until Sheppard, Teyla, Ronon, McKay and Woolsey share a meal later in the mess hall that McKay, boasting he is just too intelligent to be fooled by the A.I., learns he did see a manifestation of the A.I. He saw it as Zelenka who was, after all, responsible for the discovery of the device – and who didn't really come back early from his off-world trip, after all.