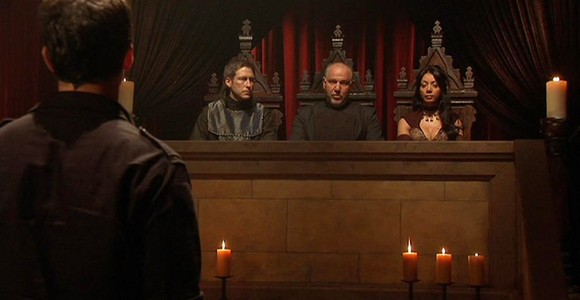 A new coalition of human worlds puts the Atlantis team on trial for their alleged crimes against the Pegasus Galaxy.

Richard Woolsey, Atlantis expedition commander, briefs Lt. Colonel John Sheppard, Ronon Dex, Teyla Emmagan and Dr. Rodney McKay about their upcoming meeting with the leaders of a new coalition of planets in the Pegasus Galaxy. With the Wraith presence significantly weakened, the various civilizations that once lived under their boot are banding together to form a sort of "United Nations" of the galaxy.

Sheppard and his team gate to the designated planet and escorted to a stark waiting room. But after the door is closed, the team is gassed. When they awaken, they are in a cell on another planet. Guards escort Colonel Sheppard into a room with a platform and a high bench, where three people sit in judgment. Kelore of Latira introduces himself, Dimas of the Free Peoples of Riva, and Shiana of the Tribes of Santhal. They speak for the Coalition. Sheppard is to answer for the crimes of Atlantis against the peoples of the Pegasus Galaxy.

First, the Atlantis expedition is accused of causing the deaths of over two million people by prematurely awakening the Wraith ("Rising, Part 2"). Human populations had yet to recover from the last round of cullings. Some cultures have been driven to the brink of extinction. Sheppard's defense begins with the story of how the Wraith attacked his team on Athos. He killed the Keeper in order to free his teammates. He had no way to know the ultimate consequence of his actions.

With the distinct impression that Atlantis will not be judged fairly in this court, Sheppard tries to withdraw. He is warned that this would be an admission of guilt on all counts. In punishment, Sheppard and his team would be taken to a planet with no D.H.D. and only enough food for immediate survival. Upset, Sheppard is returned to the cell where he explains their predicament to the rest of the team. Their only hope is to play along.

Next questioned about the Hoffan plague, something his inquisitors have little concrete knowledge of, Sheppard explains that the Hoffan drug ("Allies") has been used by Michael to make humans poisonous to the Wraith. The judges are appalled to learn that Michael is the result of a failed Atlantean experiment to convert a Wraith into a human ("Michael"). Sheppard believes Michael to be dead, as he was on a cruiser destroyed by the Daedalus several months ago ("Search and Rescue"). Pressed, however, he is forced to admit there was no body, no confirmation of Michael's death.

Sheppard argues that Atlantis is the only group winning against the Wraith. Kelore mentions the Genii plans which Atlantis thwarted ("Underground"). The Genii, who had only incomplete weapons and no delivery system, could not have destroyed the number of hive ships Atlantis has taken out.

Asked to explain, Sheppard recounts how various Wraith hives and facilities were obliterated by the team's efforts ("The Hive," "No Man's Land," "Spoils of War"). Shiana says there is no evidence to support Sheppard's claims. He counters that this lull in Wraith activity is evidence. Kelore feels that the war brought on by the paucity of the human food supply, still low because the Wraith reawakened prematurely, is the reason being the civil war which has destroyed some of the Wraith. The war has created the lull.

Meanwhile, searching for the lost team, Major Lorne eventually returns to Atlantis with a representative of the Coalition, Myrus. He explains to Mr. Woolsey that Sheppard and his team have been arrested. The subterfuge was the only way that the technologically inferior Coalition could demand that Atlantis stop acting unilaterally, without accountability to the millions of people in the Pegasus Galaxy. Woolsey angrily points out that Atlantis is the only party successfully fighting the Wraith. He locks up Myrus – an action that supports Myrus's contention that Atlantis is a rogue element, acting without due process or restraint. Lorne worries that if this matter is not dealt with, any team from Atlantis could be ambushed at any time.

When Sheppard returns to the cell, he finds Woolsey there. Woolsey's plan is to use his skills as a lawyer to win this trial.

Woolsey feels that while six worlds were destroyed, 12 hive ships were also destroyed. On balance, more lives have been saved. When he adds that Atlantis's Elizabeth Weir was sacrificed, Shiana reveals that her people and her family were murdered – among the planets wiped out by the Replicators during the war last year ("The Seer"). She wants Atlantis to pay for that.

In the cell, Woolsey discusses his impressions with Sheppard and the others. They realize that the Genii are making a bid to be the military arm of this new Coalition, that the Genii are behind the tribunal. Believing Dimas to be a fair man and Shiana to be set against them, Woolsey approaches Kelore, intent on gaining the man's backing – by whatever means necessary. He confronts Kelore about the Genii's suspected involvement, and argues that Atlantis would make for better muscle behind the Coalition. If he votes for their exoneration, Atlantis will back them.

The judges present final charges of collusion with the Wraith. Woolsey must delve into the complicated relationship with Todd and how he has helped Atlantis ("Common Ground," "Be All My Sins Remember'd").

After a short deliberation, the votes are cast. Dimas has been persuaded to vote "Not Guilty," while Shiana's mind was set against them all along. Only Kelore's vote remains.

Woolsey returns to the cell and reports to the team that they have been cleared of all charges.

Over a celebratory drink and cigar back in Atlantis, Woolsey notes that he has committed Atlantis to a larger day-to-day role in the politics of the Pegasus Galaxy, and he doesn't know if the I.O.A. will agree. Sheppard suggests they worry about that tomorrow.