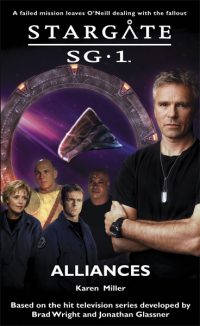 SG-1 faces the consequences of their failed mission to Euronda, but are called upon to help the Tok'ra recruit new hosts -- by infiltrating a Goa'uld breeding camp.

The price of failure ... All SG-1 wanted was technology to save Earth from the Goa'uld, but the mission to Euronda was a terrible failure. Now the dogs of Washington are baying for Jack O'Neill's blood -- and Senator Robert Kinsey is leading the pack. When Jacob Carter asks General Hammond for SG-1's participation in a mission for the Tok'ra, it seems like the answer to O'Neill's dilemma. The secretive Tok'ra are running out of hosts, and Jacob believes he's found the answer -- but it means O'Neill and his team must risk their lives infiltrating a Goa'uld slave breeding farm to recruit humans willing to join the Tok'ra. It's a risky proposition, especially since the fallout from Euronda has strained the team's bonds almost to breaking. If they can't find a way to put their differences behind them, they might not make it home alive ... From Fandemonium