City of the Gods 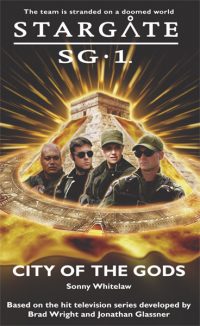 SG-1 is marooned on a dying planet, where the inhabitants' only hope of survival is an ancient prophecy with Jack O'Neill at its center.

My enemy's enemy ... When a crystal skull is discovered beneath the Pyramid of the Sun in Mexico, it ignites a cataclysmic chain of events that maroons SG-1 on a dying world. Xalótcan is a brutal society, steeped in death and sacrifice, where the bloody gods of the Aztecs demand tribute from a fearful and superstitious population. But that's the least of Colonel Jack O'Neill's problems. With Xalótcan on the brink of catastrophe, Dr. Daniel Jackson insists that O'Neill must fulfil an ancient prophecy and lead its people to salvation. But with the world tearing itself apart, can anyone survive? As fear and despair plunge Xalótcan into chaos, SG-1 find themselves with ringside seats at the end of the world ... From Fandemonium

Review by Skydiver Over the years, we've seen SG-1 begin their missions in a variety of ways. There's the M.A.L.P. report, the briefing room scene, SG-1 exiting the gate, and someone getting a phone call. City of the Gods begins with such a phone call. Professor Stanislaw Wodeski calls Daniel, searching for Daniel's grandfather Nicholas Ballard (last seen in "Crystal Skull"). It seems that Professor Wodeski has found himself a crystal skull of his very own, complete with glyphs that are astonishingly similar to those found by Daniel on the planet Orban. This leads the S.G.C. to wonder if they've found yet another gateway to an alien planet. And this possible gateway is important enough that Daniel and Teal'c are sent to Mexico to check it out. In the meantime, Sam and Jack, who along with the rest of SG-1 are supposed to be on a pre-Christmas downtime, go to help SG-10, who are in a bit of trouble. SG-10 was chaperoning a group of geologists, studying a period of seismic activity on an unpopulated moon, brought about by the moon's orbit. Every 52 years, the moon passes close to its host planet and that alteration of the moon's gravity is enough to trigger a period of volcanic eruptions and earthquakes. One such earthquake caught SG-10 unawares and with two members injured, they need help to get their people home. While Jack and Sam lead the med-evac team, Daniel and Teal'c try to track down the errant Professor Wodeski in Mexico -- a professor they never quite catch up with because he uses the crystal skull he's just found to transport himself off the planet, just like Nick did all those years ago. Except, unlike Nick, Wodeski doesn't come back. Back on the moon, Jack and Sam are ready to return home, all members of SG-10 present and accounted for. Suddenly, there is another violent earth quake and they are both swept away by a raging flash flood. The flood nearly drowns the S.G.C. and blocks the gate, forestalling any rescue attempts. Battling not only a dying moon, but centuries old beliefs and traditions, SG-1 has to fight for their lives, and the survival of an entire civilization. Set in the latter half of Season Five and juxtaposed against the ritualistically brutal Aztec society, City of the Gods is a quintessential adventure. It draws heavily upon the show's mythology and canon, with references to "2001," "Desperate Measures," "Crystal Skull," "Enigma," "Learning Curve," "Jolinar's Memories," "The Devil You Know," and even book two of the Fandemonium series, Sacrifice Moon. I found City of the Gods an interesting read and one that flows relatively well. There is a nice blend of "whump," action, comedy, and adventure with more than a little anthropological research thrown in for good measure. The author draws heavily upon the Aztec legends and myths in a way that the show often does. These little bits of research add a dose of reality and history to the fantasy and make the story more believable. Even though I did enjoy the book and was enthralled in the story, it does have a few rough spots. Not being a student of the Aztec, I often found the names to be a stumbling block. I would keep trying to mentally pronounce them, but the tongue-twisting combinations often left me speechless. The author did have a creative way of getting the pronunciations across, using Jack's habit of mispronunciation to give the reader a helping hand (Xipe-Spiffy, Yaxkin-Yak skin, Xalotcan-xylophone), but sometimes she used this trick a bit too often. (After reading Jack constantly and consistently mispronounce names, even I wanted to whack him upside the head.) A lot of events in this story happen "off screen," leaving the reader with the feeling that either the book is missing a few pages or maybe some parts just were never written. I would have loved to have seen Daniel and Teal'c returning home after the temple collapses, or gotten a peek into Sam's head after she returns to the S.G.C., the last surviving member of SG-1, or even taken a gander into Nick's life pottering around in the enormous pyramid and his interpretation of his "giant aliens" -- not to mention some closure for the whole "I didn't want to adopt Daniel" issue. It also would have been nice to have seen something from one of the native's point of view. Just like in television episodes, I really don't care about a native population that I haven't met or gotten to know. In one way, if all the "missing scenes" were put in, the book would easily be about a hundred pages longer and would probably come close to dragging or being too deep, especially given the author's sometimes flowery and verbose writing style. But in a few places, the absence of these scenes gave the book a rather choppy feel. Often I would start each chapter and it would take a couple of paragraphs to get back into the swing of things and sort out all that has happened "during the commercial." The ending feels a bit rushed, and misses a couple of opportunities to add angst and drama. Up until the last few pages, there is a very good pace and flow. Then the book seemed to mimic the show upon which it is based -- especially the episodes where the writers seem to realize that they have eight minutes of story and three minutes to tell it in, so viewers get a quick "and they lived happily ever after" and a hasty fade to black. Despite these technical flaws, City of the Gods is a very enjoyable story. All four members of the team are present and accounted for and, while I haven't found this the best of the four books out so far, it is certainly a satisfying way to spend a couple of hours. Rating: * * 1/2