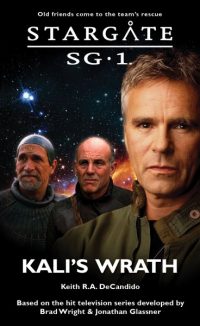 After an SG team brings an injured Goa'uld First Prime back to Earth, SG-1 finds itself in the middle of a war between the System Lord Kali and the Reetou.

Hell hath no fury ... When the only surviving member of SG-7 brings Kali's injured First Prime back to Stargate Command, Colonel O'Neill and his team are called on to investigate an attack by the Reetou on one of Kali's homeworlds. But when a sabotaged Stargate leaves O'Neill, Carter and Daniel trapped off-world, Teal'c must team up with Jacob Carter, Bra'tac and Kali's First Prime to rescue his missing team. Meanwhile, the rest of SG-1 is presented with an offer they can't refuse — help Kali negotiate peace with the Reetou or see thousands of her people massacred. As time ticks down to the fateful summit, SG-1 must escape from Kali's fortress before they fall victim to the Reetou's deadly subterfuge ... From Fandemonium