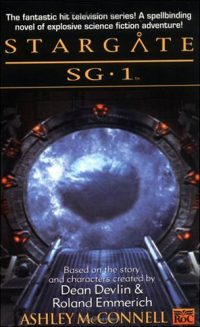 The future of Earth is in danger as the evil serpent god Apophis rises in the wake of Ra's destruction, prompting Colonel Jack O'Neill to lead a new mission through the Stargate to hunt down this new enemy.

An awesome force of evil, bent on domination and destruction, has blasted its way through the Stargate, threatening the very survival of planet Earth. Ra is dead, but the serpent god Apophis has risen in his wake ... and he's more than Ra's equal in his cunning, in his cruelty, in his ruthless lust for power. Colonel Jack O'Neill has been summoned out of retirement to lead the expeditionary mission through the Stargate to hunt down Apophis and his legions. But the search-and-destroy team is about to face the ultimate test of courage -- for if O'Neill and his crew fail to return in 72 hours, they will be trapped, their fate sealed forever. From Roc