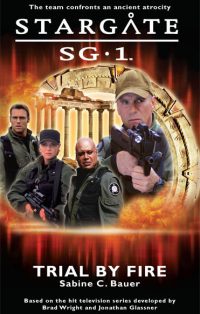 The team embarks on a mission to Tyros, an ancient society teetering on the brink of war. But when their spiritual leader is murdered, the Tyreans beg SG-1 for help against their sworn enemies.

"Trial by Fire," the first Stargate SG-1 novel from Fandemonium Books, follows the team as they embark on a mission to Tyros, an ancient society teetering on the brink of war. A pious people, the Tyreans are devoted to the Canaanite deity, Meleq. When their spiritual leader is savagely murdered during a mission of peace, they beg SG-1 for help against their sworn enemies, the Phrygians. Initially reluctant to get involved, the team have no choice when Colonel Jack O'Neill is abducted. O'Neill soon discovers his only hope of escape is to join the ruthless Phrygians -- if he can survive their barbaric initiation rite. As Major Samantha Carter, Dr. Daniel Jackson and Teal'c race to his rescue, they find themselves embroiled in a war of shifting allegiances, where truth has many shades and nothing is as it seems. And, unbeknownst to them all, an old enemy is hiding in the shadows ... From Fandemonium Ltd.

Review by David Read Picture, if you will: A lush, Earth-type planet with a longing to get in touch with its inner feelings. Two warring nations eager to annihilate each other. A young lad mesmerized by a great "pied piper" Colonel. And the stench of Goa'uld meddling in the air. All sound familiar? I thought so. Throw in an irritating European archaeologist, and you have Trial by Fire, the first in a new series of novels by Fandemonium Books dedicated to the tight-knit fabric of the Stargate universe. And though most of what the book contains has been done on the television series to one degree or another, this book shows that there is really nothing wrong with taking these Stargate hallmarks off the shelf and giving them a good dusting -- provided you have a fresh twist or two. I must confess to picking up this book and going through the motions with the first few chapters, as most of it is indeed the motions of countless Stargate missions from years past. Thanksgiving is in the air, and Daniel Jackson is in a foreign country amusing himself with ancient relics, stumbling on the artifact that eventually sends the team off on their adventure. There are things that one must do to get the ball rolling on a traditional Stargate story. For SG-1 to get to this planet, there must be a mission, and for that mission, a mission objective. P2X-159, Tyros, is not listed on the Abydos cartouche, so it's up to SG-1 to discover why not. Fair enough. On the other side they almost immediately discover a peaceful, pre-industrialized society known as the Tyreans, who possess worshiping commitments to the god Meleq. He's certainly not a Goa'uld anyone has been familiar with. We also learn the Tyreans have an enemy, the Phrygians, heretics who do not follow in the teachings of Meleq (insert gasping crowd here). But don't believe everything you hear from the locals. Though the Phrygians have a splinter in their eye, deep down the Tyreans have a log. This book is another fine example of the Stargate being located in the "wrong" country, as we've seen in "New Ground," "The Other Side," and as some would argue, "Meridian." What certainly solidifies the enjoyment of this book are the countless references and threads to past missions, a reliable centerpiece to most Stargate episodes. "Window of Opportunity" is referenced numerous times, particularly because these cultures are Latin-speaking. In fact, the Latin that Jack and Teal'c learned while being tossed in continuous time loops plays a good role in allowing Jack to communicate with his captors. Brilliant. I was pleased with how author Sabine C. Bauer clearly tries to give Teal'c a presence in the story, and she succeeds. I could've done with more Carter and less of the European archaeologist, Dr. Kelly, who seems to be there to give the U.K.-based author a grounding point. I will be frank: Midway through the book I wanted to skin and stuff Kelly. At that point she is not the character you love to hate. Her choices are singular, and for one ridiculous reason or another she keeps calling O'Neill "duckie." It doesn't help that O'Neill is forced to spend most of his time with her. If any past episode plays the most prominent role, it is "Abyss," as Daniel is continuing to discern his ascended past, often to little avail. In a nightmare he begins to unravel the events of that episode, and it is a perfect springboard for how the events turn darker in the story. If you liked "Abyss," Trial by Fire does not disappoint in that respect. The climax of this story is only paralleled by the "Stargate" feature film itself, with Kasuf leading thousands of angry Abydonians down the dunes toward Ra's pyramid. Instead, here it is Daniel, defended only by Teal'c and Carter, and everyone of the principle actors plays a part (even Dr. Kelly, who this reader finally began to enjoy). The surprise, yet familiar villain is also exquisite, and most everything tracks with the confines of the Stargate universe we love. Though a majority of the new characters are a little difficult to discern from one scene to the next (particularly the Tyrean Synod), most are indeed equally Stargate in nature. A few I even wish we didn't have to give up. Tertius, a Phrygian whom Jack takes the entire book to accept, builds a trust with him throughout the story that is equivalent to him and Maybourne. Luli, Jack's new knee-high admirer, was usually enjoyable, though the author neglected to complete his story arc when all was said and done, which made me a bit uncomfortable. I don't think I could've been more pleased with the first book from this publisher. Sure, most of the dislikes I had were personal preferences, but all-in-all Trial By Fire is a good read. Do I recommend this to fans of the franchise? Definitely. It is clear that meticulous care was taken to make show references accurate, right down to the spelling of complex character names, and to make the story abundantly intriguing -- while making careful choices so as to not damage canonicity in episodes that have yet to air. I would love to see the planet Tyros referenced in a future episode. What a tip of the hat that would be! I hope Bauer gets to write another Stargate novel down the road in this wonderful series, because when she does I am confident her next work will be even better. Rating: * * *