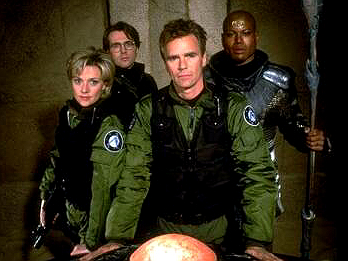 Though she grew up a sci-fi fan watching Star Trek and other classics, Mercedes came to Stargate only later in life.

Happy Anniversary to our favorite television show! Twenty years ago today Stargate SG-1 kawooshed onto our TV screens with the U.S. debut of “Children of the Gods.”

We’ve been celebrating the occasion with a free screening of Children of the Gods – Final Cut, an in-depth look at the amazing two-parter “Heroes,” and a supercut video of some of SG-1’s finest moments! 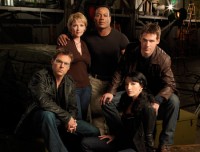 Today we mark the day itself by counting down 20 great episodes of Stargate SG-1 — as voted on by you! For more than 15 years GateWorld has run weekly episode polls asking fans to rate the newest hour of the show. What we call the “Fan Rating” is then tallied up using a 10-point scale, and can be found in our SG-1 episode guide and the season-by-season ratings reports.

Now we’re not claiming that these are objectively the show’s best 20 hours — only that they rank the highest in the polling. Some truly great episodes over the years ended up suffering from fandom conflicts (such as Daniel’s departure in “Meridian,” and his return in “Abyss” and “Full Circle”). On the other hand, what’s nice about this particular set of polls is that they are long-term, and ask fans to rate each episode on its own merits — not relative to other episodes on a list.

Many of the show’s finest hours, of course, scored above a 9 out of 10 in our polling. Those tended to be the less-controversial hours beloved by the widest cross-section of Stargate fans.

So, to celebrate 20 years of Stargate SG-1, what follows are the top 20 scoring episodes. What makes your top 20 list? 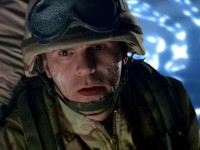 The countdown starts, ironically, with the episode that started it all! “Children of the Gods” has always been a fan favorite, and that first trip through the gate was responsible for getting many of us hooked.

Also scoring a 9.24 are Jack’s turn going rogue in Season Three’s “Shades of Grey,” plus the Replicator-Asgard battle royale in Season Eight’s premiere, “New Order, Part 2.” (That one ended, you’ll remember, with RepliCarter naked and covered in goo.) 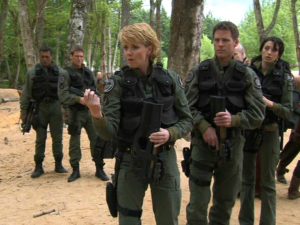 SG-1‘s tenth and final season headed into its mid-season break with “The Quest,” the first of a two-parter that saw SG-1 reluctantly join forces with two of its greatest adversaries — Baal (Cliff Simon) and Adria (Morena Baccarin) — to solve Merlin’s puzzles and track down a legendary weapon that might have the power to destroy ascended beings. 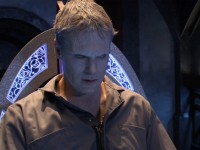 After Daniel is captured by Adria at the end of “The Quest, Part 2” he turns up a few weeks later with a story to tell — starting with how Adria has converted him into a Prior of the Ori. Daniel’s dark turn was originally conceived to be longer and darker, but the show’s writers decided it would harm the character too greatly. Instead the remnants of Merlin’s consciousness protected Daniel from full conversion, putting him in a place to gain Adria’s trust and eventually use Merlin’s weapon against the Ori. 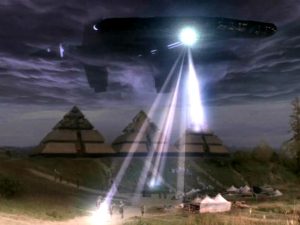 Although SG-1 had encountered the Asgard from a distance back in Season One, it wasn’t until Season Two that Daniel and Sam would break through the hologram presented to the people of Cimmeria and see Thor as he really is: an alien benefactor, who stands watch over the planet. When Heru’ur (Douglas Arthurs) comes knocking, Thor brings his ship and makes the true power of the Asgard felt. 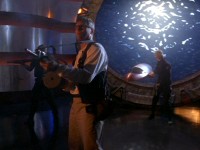 We have an astonishing four-way tie for the #13 spot, with all of these episodes scoring equally. They range from Sam and Jack’s icy tomb in Season One, to the debut of the Replicators in the third season finale, to a pair of pivotal hours late in the show’s eighth season. “Reckoning, Part 1” saw the Replicators attack the Milky Way Galaxy and decimate the ranks of the Goa’uld, while “Threads” tied up some loose ends with the defeated (but still half-ascended) Anubis — and between Jack and Sam.

NEXT: Cracking the Top 10

Great stuff! Love all these episodes….

I must protest. The Lost City, Part 2 is NOT the first time we encounter a ZPM. At least, not entirely.

What O’neill creates in The Fifth Race is essentially a makeshift. primative ZPM to allow him to power the gate enough to reach the Asgaard homeworld in the Ida Galaxy. The devices are even shaped similarly, although they are made out of different materials, and obviously use different principles to produce their power.

Carter then later fixes it with the help of Mirror Carter to allow the Mirror world to contact the Asgaard as well.